Under the Samsung Lions’ new manager Heo Sam-young, Lee Sung-gyu is hoping that this year will finally be his time to shine. 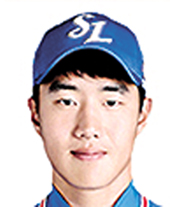 Ahead of the 2020 season, one of Heo’s biggest strategies is to make the most of the utility players’ abilities. Heo seemed to be set on assigning utility players here and there to manage the games throughout the season, and perhaps, this is one of the reasons why the Lions signed Tyler Saladino, as he is a utility player who can cover second and third base, as well as the shortstop.

Heo’s strategy may seem risky, but to Lee, it’s an opportunity. Last September, after he got discharged from the Police Baseball Team, he rejoined the Lions, and under the team’s former manager Kim Han-soo, he covered second and third base and shortstop.

But during the Lions’ spring training in Okinawa, Japan, he was given one more position to cover, center field.

Throughout tune-up games in spring training, Heo consistently swapped Lee between first base and center field, to check his ability to play multi-positions in both the infield and the outfield. Such a strategy has risks and was unfamiliar for Lee.

“Aside from the very first time I played baseball, I’ve never covered the outfield,” Lee said. “At this camp, I went through the process of understanding and training my defense in each position.”

If Lee does successfully manage to cover first base, it’ll help the Lions significantly this season, as he has the potential to be a batter that can add strength in the lineup. When Lee first got drafted by the Lions in 2016, he slowly gained experience in the Futures League.

Despite his ability to play in many positions, Lee’s strength was in batting, not defense. Back when he played for the Police Baseball Team as part of his mandatory military duty, Lee won the Futures League home run title by hitting a total of 31 throughout the 2018 season.

That season on April 11, during the team’s game against the Kia Tigers’ Futures League team, he hit four home runs in four consecutive at-bats. Although he gained experience with the Police Baseball Team, it wasn’t easy for him to rejoin the Lions’ roster, as the club had such depth in its infield.

This was why Lee had to become a utility player. Last season, Lee’s role was nothing more than fulfilling the absences of starting players. He also struggled with his batting with the Lions. He had potential but was unable to follow through with his performance leading to him being considered as a “hopeful.”

However, Lee wasn’t too disappointed about that label saying, “I only played in three seasons after I turned pro. To get rid of that label, I’m only thinking about trying and working harder.”

He only played in 16 games throughout 2019 season, but once again he showed his potential as a slugger. During a game against the LG Twins on Sept. 18, Lee hit his first home run in the KBO, against the Twins’ closer Go Woo-suk, showing that he has power.

But he still believes that he has a lot more weaknesses than strengths.

“I still have a lot of areas to work on,” Lee said. “Firstly, I need to be more mature, mentally. Since I had less pressure with the Police Baseball Team, I got to feel a little more comfortable playing games. [But when I returned to the Lions], there were a lot of fans and it’s really tense. I think I need to get stronger, mentally, to play better games.”

As for Lee’s goal this season, he didn’t set any specific numbers, but he is hoping to play in as many games as possible, without any injuries.