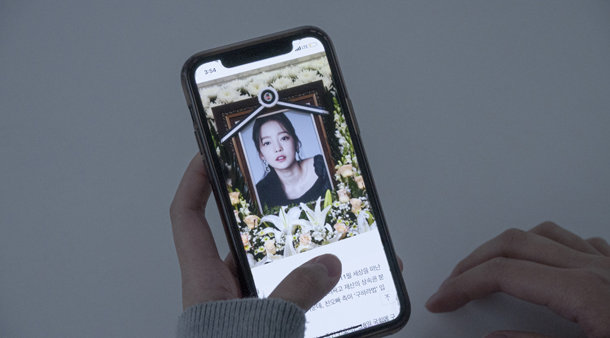 Last fall, after the deaths of two young female celebrities Sulli and Koo Ha-ra, it wasn’t difficult to find who was the likely culprit. Although neither of them directly pointed to the myriad of malicious comments they had been bombarded with over the years, it was no mystery that the unfiltered hostility they received online weighed on both of them heavily. Sometimes the comments on news articles and photographs posted online would criticize them for not smiling, other times it was because they smiled too much. For a long time, those at the receiving end of those comments had little they could do to combat the vitriol thrown their way.

Following the two unfortunate deaths, Daum and Naver, Korea’s biggest portal sites, shut down the comments function on all entertainment news. Daum was first, ending comments on entertainment articles on Oct. 31, and Naver followed on March 5.

“As you may have seen through recent unfortunate events, the level of personal insults used in the comments of entertainment news has come to harm the existence of a healthy space for communication,” said Kakao, operator of Daum, when it announced the move on Oct. 25. Naver said it was shutting the comments down because “the negative effects of malicious comments against individual celebrities are too severe.”

Celebrities often speak out about being tormented by cyberbullies, such as the late Sulli, top, and Koo Ha-ra through her Instagram. [JTBC, SCREEN CAPTURE]

Four months have passed since Daum shut down the comments, and change is visible for both readers and the entertainment industry. While readers complain that it’s become difficult for them to see what other people think, entertainment agencies applaud the measure as an immediate remedy to an ailment that had long needed to be cured. But a question still lingers - is this the way to stop online bullying altogether?

On March 12, a “TV and Entertainment” section was created on the Korean version of Blind, an anonymous community app for professionals of all fields. The decision to introduce the section was made by the company’s American headquarters and was “irrelevant to the portal sites shutting down [the] comment sections,” according to a statement from Blind. But many people guessed that Blind saw an opportunity when Daum and Naver shut down their comments sections.

Daum and Naver each curate news articles in their respective news sections so that readers don’t have to visit the websites of each individual news outlet. According to the “Digital News Report 2018,” published by the Korea Press Foundation, 77 percent of people in Korea read online news through curation services, which is more than twice the global average of 30 percent. Only 5 percent of people in Korea actually visit the websites of media outlets to read the news.

In this environment, the comments on portal sites are considered representative of public opinion, and news reports often cite comments with multiple likes as responses from “netizens.”

“In the past, when there was an article about one of our artists, there would be follow-up reports about the comments on the original article with headlines like, ‘Netizens are horrified at’ or ‘These are the reactions to’ something,” said an insider at a major entertainment agency. “A malicious comment gives birth to more, and it has tormented a lot of people. I feel like the portals let it happen over the years for the clicks, but now they feel the social pressure. I personally hope the comments never come back.”

Another insider from a different agency agreed, saying, “Unlike fan communities, articles on portal sites are seen by the population at large. And people who don’t know the entertainment field that well can’t tell what’s wrong with something unless they see it in comments. The decision has taken a lot of pressure off of us.”

Daum and Naver have both said that there are no plans to bring back the comments on articles featured in the entertainment verticals of their news sites. Culture critic Kim Heon-shik argues that the portal sites shouldn’t stop at just entertainment news and should shut down the comments sections for all news stories.

“In the long run, portals should only leave comments open for news stories that have urgent relevance to people’s lives,” Kim said. “When you have comments, people develop a habit of checking what others think about the matter even before they set their own standards, and they shape their opinions to match the comments that have the most likes. People may think that there would be a big problem if all comments were banned, but in reality, there wouldn’t be.”

But, taking away a place for people to bully others doesn’t mean that people will stop bullying, according to Professor Hwang Yong-seok of the department of media and communication at Konkuk University. It may take a long time, he says, but the best solution is always going back to the basics.

“Celebrities are considered public figures in Korea, but they’re not - they’re just private individuals. People demand that they bear the responsibilities of public figures, and the confusion is where all the aggression stems from. But for the portals to have blocked all access to comments as a whole goes against the very freedom of expression that’s core to the internet. It’s crucial that the companies keep to their core values,” he said.