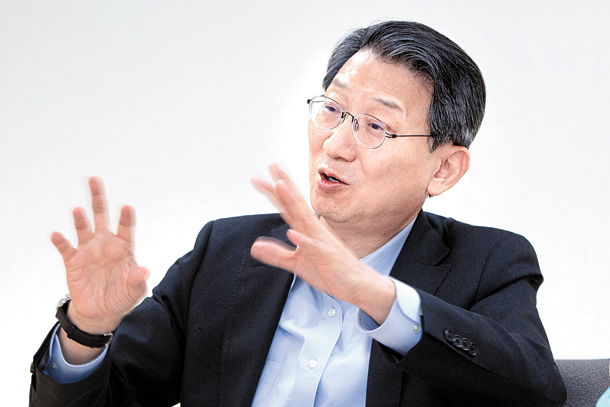 Hanjin KAL Chief Executive Seok Tae-soo said the three-party alliance’s request to lower the debt ratio to a “ridiculously low amount” is proof that it does not understand the airline industry. [HANJIN KAL]

The company is holding its annual shareholder meeting on March 27. Two major shareholders, company Chairman and CEO Cho Won-tae and sister Cho Hyun-ah, are battling for control of the board.

Seok started his career in Korean Air Lines in 1984 and was close to Cho Yang-ho, the former chairman.

Q. Hanjin KAL is heading into a mud fight. What do you think are some of the weak points of the argument made by the group battling Chairman Cho?

A. First off, I would like to point out that they are only interested in making money. Since they come from an investment fund, their goal is to aggressively plunder the management and make profit as fast as possible. I am not sure if the general public and small shareholders are able to support that.

Another weakness is their management lineup. While each one has their own unique strengths, they do not have the right expertise and competence to lead a logistics and airline company like Hanjin KAL. They do not have the ability or the experience to commit to the long-term growth of the company.

What type of expertise is required in the airline industry?

An airline business is very different from a manufacturing business. It does not go by the rules and protocols of the World Trade Organization. It is based on mutual agreement between countries based on the rule of bilateralism. Therefore, having a partner is crucial in this field, since we follow the principle of reciprocity. For example, when we are in the United States, we have to work with a U.S. partner. Competition is important, but it all boils down to maintaining a cooperative network. Diplomatic relationships also come into play. That’s not something you can learn from reading a text book.

Delta Air Lines seems to have come to your rescue. How tight is the relationship between Delta and Hanjin KAL?

Our friendship goes way back. Korean Air Lines, Delta Air Lines and Air France were the main pillars in the making of SkyTeam, an international alliance between airlines. The success of an alliance depends on mutual trust, which cannot come from merely sharing airline schedules and short-term profit. We reached out to Delta Air Lines because we value trust. We were able to create a trusting relationship between the employees of KAL and those of Delta.

Did Hanjin KAL ask Delta to buy the company’s share?

No. But we are allies and joint venture partners. I think Delta saw the need to back up its partner. The three-party alliance criticizes Delta for raising its share of Hanjin KAL, but we are not the only airline Delta invested in. U.S. airlines consider it a virtue to create close partnerships by buying shares. For them, making investments is a way of building a sturdy partnership. Healthy competition and cooperation between national carriers is important to enlarge the overall market pie. Korean Air Lines is a national carrier, a transportation company representing Korea. We work out of a sense of duty and for the public interest. I was taught, in the early stages of my career, to always value public responsibility over profit.

You’ve been around Chairman Cho. What is his biggest strength?

I saw the training Chairman Cho Won-tae received from his father over 16 years. His biggest strength is the strong sense of responsibility he acquired over the years. He is a man who truly understands the philosophy of Hanjin’s founders and a person who knows that running a transportation business is serving the country. No one can replace that. He took the plane to Wuhan during the coronavirus outbreak out of a sense responsibility. The Hanjin group runs under family ownership, but we also have a board of directors and layers of experts with more than 30 years of experience under their belts. He is considerate of his employees and is socially sensible. There is a reason why employees support him over his sister.

The two seems to be in a duel.

It is unfortunate. I think everything will fall into place once time passes. Former Vice President Cho Hyun-ah needs to come back to the Hanjin family for matters to run their course. It is also what our former chair would want for the company.

The three-party alliance pointed out that Hanjin KAL’s debt ratio is 1,600 percent if perpetual bonds are taken into account. What’s your thought on that?

We’ve come up with a detailed plan to lower it. We plan to sell off assets, increase our productivity and issue more shares if necessary. We will do everything we can. However, asking us to decrease the debt ratio to a ridiculously low level comes from a lack of understanding of the airline business. In this field, you need to plan out 10 to 20 years in advance. You can’t expect change to happen overnight led by a single person from an investment fund or a construction company.

The three-party alliance also pointed out some of the bad decisions made by Chairman Cho. What are your thoughts?

We’ve embraced some reasonable criticism by making bold changes to our corporate governance structure and the board of directors. We ask the public to trust us and give us a chance. Hanjin is going through a huge leadership change. But, the three-party alliance is trying to rock the boat rather than add support. Its smear campaign is preposterous. Attacking our past is nothing more than burning down the house to roast the pig.