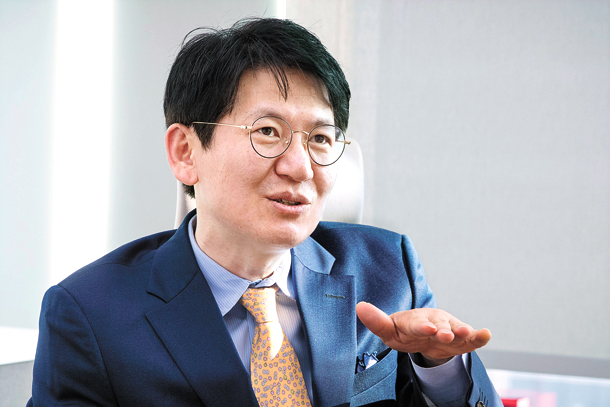 KCGI CEO Kang Sung-boo said the three-party alliance is preparing for a long war as it builds up a significant stake in Hanjin KAL. [JANG JIN-YEONG]

The following are the excerpts from an interview with Kang Sung-boo, chief executive officer the Korea Corporate Governance Improvement (KCGI) fund:

Q. Why are you against Cho Won-tae’s reappointment as the Hanjin KAL chairman?

A. Ever since Cho took control of the company, Korean Air Lines and Hanjin KAL have reported 1.74 trillion won [$1.36 billion] losses and 350 billion won in losses, respectively. Korean Air Lines has reported losses under Cho in every year except for one, in 2017. Including permanent bonds, the debt ratio is around 1,600 percent. This is a big contrast to how other major global airlines have been posting huge surpluses from low-interest rates and low oil prices.

Do you think he should step down from every position?

Yes, he has no moral or ethical strengths as a business executive, considering his past record. He injured his mother last Christmas during an argument, and in the past, he was also involved in a hit-and-run accident, elder assault and fraud, and he has been accused of receiving kickbacks.

What is the aim of the three-party alliance?

We are trying to introduce a professional management system to the company, one which can prevent unilateral decision making. This is the only solution to the current situation.

How would you respond to criticism of former SK Telecom executive Kim Shin-bae, recommended by the three-party alliance as executive director, for not being an expert in the aviation industry?

Japan Airlines was revived from bankruptcy by Kazuo Inamori, who was a founder of an electronics company, Kyocera, and IT experts who were engineering school graduates. The candidates we recommended are professional managers who will transform the company, just as Guus Hiddink led the Korean national football team to the 2002 FIFA World Cup semifinals.

The three-party alliance is supported by Cho Hyun-ah, the former Korean Air Lines executive of nut rage fame. Are you aware of the public opinion about the incident?

What is the basis for this commitment?

Shareholders should not participate in management and should do their best to normalize management.

How did you happen to ally with Cho Hyun-ah?

Cho Hyun-ah first contacted me in January after Cho Won-tae’s Christmas rage. In a February meeting, Cho Hyun-ah said that Hanjin will not be able to last for more than three years under Cho Won-tae’s leadership, which was in line with my opinion. I stressed to her that she should not participate in management, and Cho Hyun-ah accepted that restriction.

We first made contact with Bando E&C around January. Hanjin KAL seems to have contacted Bando E&C Chairman Kwon Hong-sa earlier. Some proposals that were made to Kwon went nowhere after a few meetings were held, which seems to have made Kwon feel betrayed.

The three-way alliance bought an additional 3.04 percent stake, raising its total stake to 40.12 percent. What was the thinking behind this?

In cases like this, the war lasts for a long time. We cannot exercise all our voting rights in the upcoming shareholders’ meeting because we purchased after the closing of the shareholder list. We have already doubled our profit by investing in Hanjin KAL and others. If we were to eat and run, we would have disposed of the shares rather than buying additional shares.

What do you think of Delta Air Lines increasing its stake?

We have proposed to Delta Air Lines that it should sell the stake to the three-party alliance as a block deal. If Delta Air Lines is aiming for a synergy effect in the aviation sector, it would be better to buy Korean Air Lines, not Hanjin KAL.

They are worried that we will restructure the company. But we can promise that won’t happen. KCGI has never undertaken an artificial restructuring in acquired companies such as Hyundai Cement and Innowireless.

What do you expect from this shareholders’ meeting?

There’s a rumor that we are backed by a foreign fund, especially Chinese, but we always report to the FSS and the Fair Trade Commission that we are supported 100 percent by Korean funds from various investors including wealthy individuals and businesspeople as well as general corporations and hedge funds.