Koreans airlifted out of Iran

Koreans airlifted out of Iran 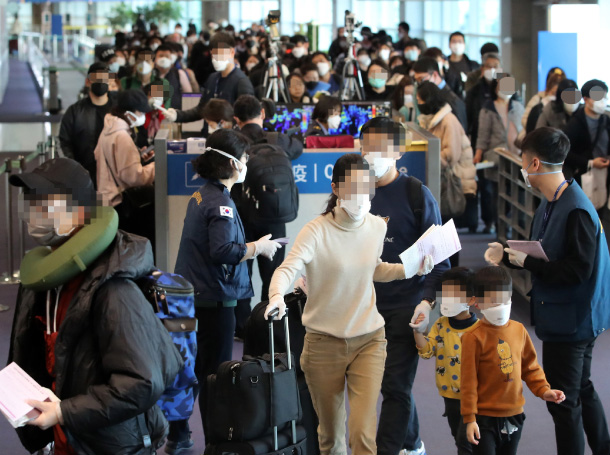 Arriving passengers wait to go through the special entry procedure at Incheon International Airport on Thursday. All foreigners entering Korea are now required to go through a temperature check, fill out a health questionnaire, provide contacts and download a mobile phone app that checks on their health for two weeks. [YONHAP]

A group of 80 Koreans and their family members were evacuated from Iran on a government-chartered flight and arrived in Korea Thursday.

The group had earlier been transported on an Iranian plane from Tehran in Iran to Dubai in the United Arab Emirates on Wednesday.

Korean Foreign Ministry and health officials were aboard the chartered flight and checked the passengers’ health conditions ahead of departure. Upon arrival, they entered Incheon airport through a separate entrance and again received health checks.

Those who test negative will be asked to undergo self-quarantine in their homes for two weeks, the incubation period of the virus.

Iran as of Thursday has over 17,000 confirmed cases of the coronavirus and more than 1,100 deaths, both figures the third highest in the world following mainland China and Italy. Seoul had been in talks with Iranian authorities to airlift its nationals and their family members amid a spike in cases in the country. There were some 200 Korean residents in Iran.

Seoul officials said that the evacuees will not undergo a mandatory two-week quarantine at a government-designated facility because health authorities determined that the situation was not as bad in Iran as it had been in China’s Wuhan, the original epicenter of the outbreak.

In late January and February, some 850 Koreans and family members were evacuated on three government chartered flights from Wuhan in Hubei Province and required to undergo quarantine for 14 days in government training facilities.

The Korean government last month sent a military plane to Japan to evacuate four Koreans and one Japanese spouse who had been aboard the Diamond Princess cruise ship off the coast of Yokohama, which eventually saw 700 passengers and crew infected. They also underwent a 14-day quarantine at a government facility in Incheon.

As the world locks down borders and reduces or severs flights completely over coronavirus fears, hundreds of Koreans have been left stranded across the globe.

Likewise, 177 Koreans in Peru have expressed a desire to return home, according to the Foreign Ministry as of Thursday, and diplomats are in discussions with Peruvian authorities.

Some 500 Koreans in Italy want to come home, according to Foreign Ministry officials, including in major cities such as Milan and Rome. An association of Korean residents in Italy has been working on organizing civilian chartered flights to bring back these people, and Seoul’s diplomats are providing necessary support in the process.

Some 1,200 Koreans in the Philippines have said they want to leave the most populous island of Luzon, which includes capital Manila, which was placed in a month-long lockdown as of Tuesday. After some confusion, Philippine authorities eased the original 72-hour window for foreigners to leave the country. Seoul officials say they are expected to be able to bring the evacuees home on Korean flag carrier planes with a capacity to carry more passengers.

Dispatching a government chartered flight, funded by the state and later compensated by the evacuees, is usually the last resort if other civilian flights and temporary routes cannot be arranged.

Guam, a popular tourist destination for Koreans, is requiring 14 days of mandatory quarantine for people arriving on the island for travelers who don’t have a certificate confirming they are virus-free. Seoul’s Foreign Ministry on Thursday advised travelers already in Guam to return to Korean at an early date as it is not clear when Korean flights to the island, already reduced, will be suspended.

There are 170 countries or territories with some form of entry ban or quarantine measures on people coming from Korea as of Thursday, according to the ministry.

Korea on Thursday expanded its special entry procedures to all foreigners entering the country, requiring a temperature check, filling out a health questionnaire, providing contacts and downloading a mobile phone app to check on their health for two weeks.

However, amid a downturn in new patients in Korea and a spike in cases globally, there are domestic concerns that current quarantine measures are not sufficient to keep out incoming travelers who are infected.

The Korean Justice Ministry said it will cancel visas or permits of foreign nationals residing in the country should they be suspected or confirmed cases of the virus and resist authorities’ requests to be quarantined, tested or treated. It could also consider deportation or an entry ban depending on the case.