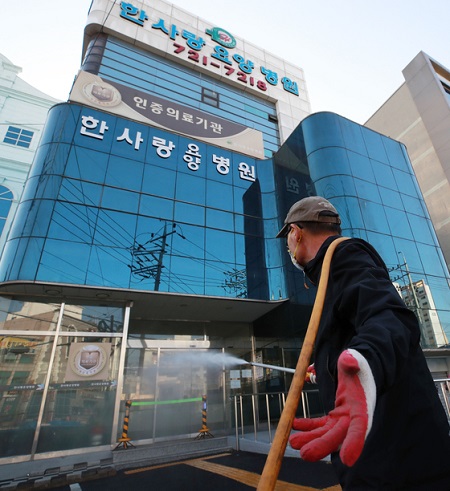 A worker sprays antiseptic solution against the coronavirus on Hansarang Care Hospital in Daegu Wednesday, where at least 75 infections have been traced. [YONHAP]

The Korea Centers for Disease Control and Prevention (KCDC) said 152 cases were tallied Wednesday, of which 97 were from Daegu, 18 from Gyeonggi and 12 each from Seoul and North Gyeongsang.

Most of Daegu’s latest infections trace to Hansarang Care Hospital in Seo District, where a new cluster was discovered Wednesday, as well as other nursing homes and hospitals for the elderly. Daegu officials have been checking a list of some 390 places with dense populations of senior citizens, where infection clusters were likely.

At least 108 infected patients have been detected through that process this week, of which 75 were from Hansarang Care Hospital.

Daegu Mayor Kwon Young-jin said Thursday morning in a press briefing that the city has so far finished testing 20,448 people out of 33,628 in such facilities, about 60.8 percent, hinting more infections were likely to be uncovered.