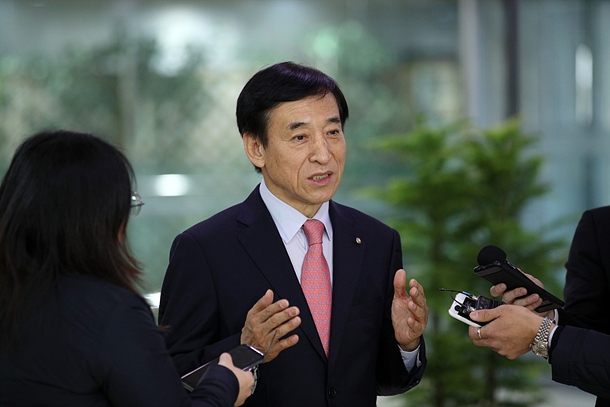 Bank of Korea Gov. Lee Ju-yeol, center, speaks to the press on Friday. [BANK OF KOREA]

Korea and the United States signed a bilateral currency swap Thursday evening as global demand for the safe haven asset of U.S. dollars skyrocketed around the world amid intensifying fears over the coronavirus-driven economic fallout.

The latest swap lines which will last for at least six months will provide the Bank of Korea with $60 billion in exchange for the equal amount of Korean won to ease the liquidity crunch of U.S dollars in Korea.

“The [Bank of Korea (BOK)] expects the latest swap line to ease the domestic foreign exchange market which has seen a rapid increase in the exchange rate due to an imbalance between the supply and demand of the U.S. dollar,” the BOK said in a statement.

The latest arrangement is the second time in history for Korea to establish a currency swap with the United States. It had signed a $30 billion currency swap in October 2008 in the aftermath of the global financial meltdown. The swap line at the time was initially designed to last for six months but was extended to more than one year.

“When and how the injected U.S. currency will be distributed has not been decided,” said BOK Gov. Lee Ju-yeol Friday. “Since we have precedent in 2008, the details of the arrangement will take less time.”

Lee said the six-month term is “changeable” depending on the market situation.

“It will be act as a safety valve in stabilizing the domestic foreign exchange market, which has recently been affected by the global financial market fear,” Kim said during a government meeting on Friday. “The size is twice of the deal made during the 2008 global financial crisis.”

The vice finance minister asked the market to remain calm stressing that while the immediate influence of Covid-19 on economic confidence can’t be avoided, the current situation won’t last forever.

Korea’s market was highly volatile throughout the week, especially as foreign investors here scrambled to liquidate their holdings to secure dollars.

The value of the Korean won saw a sharp depreciation Thursday as it closed at 1,287.50 won, up by 40 won, reaching the highest level since June 2009. The main bourse which had to halt trading due to high volatility closed at 1,457.64 Thursday, experiencing a hefty 8.39 percent drop.

The Korean won-dollar exchange rate eased as well on Friday, being traded at 1,262.6 won in the morning, down by 1.36 percent.

“The latest injection of U.S. dollars will contribute to the stability of the foreign exchange market, but the latest liquidity crunch derives more from the global market rather than the domestic market,” said Park Sung-woo, an analyst from DB Financial Investment.

“While the Korean won-dollar rate will show settlement for the time being, the global capital market has to settle down in order for an ultimate solution to the problem.”