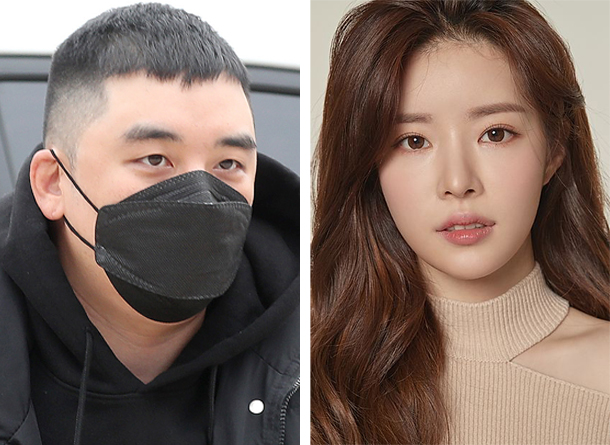 Did actor Yoo Hye-won follow Seungri to Cheorwon, Gangwon, when he entered military camp on March 9?

Yoo is suspected of following Seungri, a former member of boy band Big Bang, to the military camp with her dog, reigniting suspicions that the two are dating. Seungri’s real name is Lee Seung-hyun.

On March 9 when Seungri arrived at the camp gates, a photograph of him getting out of the car also captured a person holding a black-and-white spotted spaniel.

Although the silhouetted person holding the dog was likely a man, the dog’s breed and color matched that of Yoo’s pet, which has appeared in her Instagram feed in the past. And it’s not the first time that the two have been the subject of dating rumors.

In 2018, a Chinese media outlet reported that the two were spotted in Amsterdam together and claimed that the pair had been seeing each other for a year.

The 2018 picture showed a woman — whose face is not clearly visible — hugging Seungri in front of a hotel. The two stars did not respond to the suggestions at the time.

Yoo’s agency SBD Entertainment declined to directly address the rumor, saying, “This is a private matter for the actor, and we do not know.”

Seungri was originally scheduled to begin his military duty last March but postponed his service once when he was found to be among many celebrities and entertainment insiders linked to the so-called Burning Sun scandal early last year.

Yoo is a model-turned-actor who began her career in the past couple years. She signed with SBD in 2018.