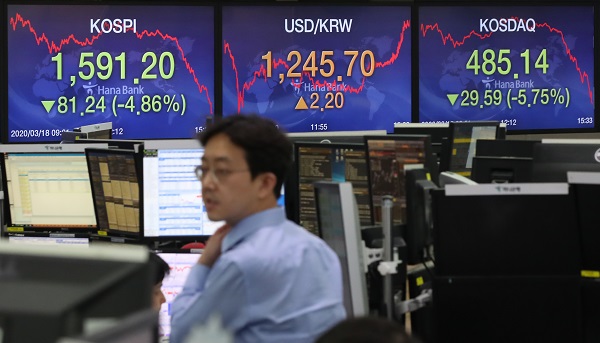 Boards in the dealing room of KEB Hana Bank in central Seoul show the Kospi index slump down below the 1,600-point level on Friday. [YONHAP]

Korean stocks ended the week on an unprecedented bull run — even requiring a brief halt to trading to cool off the market — following positive overnight news of a $60 billion currency swap with the United States.

The rapid jump in stocks forced a halt to trading for five minutes, on both the Kospi and the secondary Kosdaq.

According to Korea Exchange, the Kospi 200 futures rose to 5.31 percent at 11:22 a.m., activating the sidecar, which automatically kicks in when those futures move more than 5 percent in a one-minute timespan. It’s the first time a sidecar was activated on a bull run in nine years, with the last being Dec. 1, 2011.

It’s the first sidecar activated in the tech-heavy market in more than two years, the last being Feb. 8, 2018.

There have been four sidecars initiated so far this year, three of which were activated to keep the market from plummeting further.

The market’s sharp turnaround echoed a good day for stocks around the globe. In the United States, the Dow Jones closed 0.95 percent higher on Thursday and the S&P 500 closed up nearly half a percent.

Thanks to the bullish rally, the won, which has been steadily depreciating, recovered most of the value it has lost on Thursday.

While the won’s value dropped 40 won against the dollar on Thursday, it appreciated 39.2 won to end the week at 1,246.5 won. During the intraday the won appreciated as much as 1,238 won.

The turnaround on Friday was largely attributed to the announcement late Thursday that Korea was among nine countries that signed currency swap deals with the U.S. Federal Reserve.

It was Korea’s second currency swap with the United States, the first being in October 2008, in the early stages of the global financial meltdown. Thursday’s currency swap was double that of the $30 billion deal in 2008.

“[The currency swap] was a move to prevent the credit crunch in the dollar capital market due to the sharp value decline of emerging markets currency,” said Lim Dong-min, Kyobo Securities economist.

Foreign investors continued to dump shares for a 12th consecutive trading day, while retail and institutional investors were net buyers.

But some experts have raised questions on how long the currency swap effect on the stock market could last — especially as the coronavirus continues to spread aggressively in the West.

“While as the final lender the currency swap deal by the central bank was appropriate, it wouldn’t be possible to completely block worries of a credit crunch in the market,” said Lim.

And there would need to be several more days like Friday to recoup the value lost from the Korean markets in the last few weeks. Similar to other stock markets around the globe, the Kospi has fallen by more than 20 percent since the beginning of this month, including Friday’s gains.

Kim Yoo-mi, a Kiwoom Securities analyst, said in order for the won to continue to strengthen against the dollar, there will need to be signs that the coronavirus spread is stabilizing while the dollar can’t appreciate too much.

“Currently the number of confirmed cases in the United States and in Europe continues to increase,” Kim said. “As such, anxiety over an economic recession and credit risk still remains.”