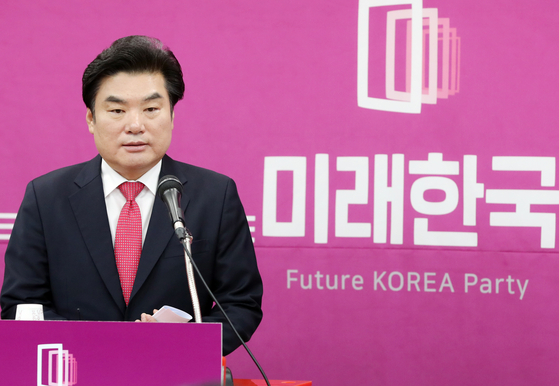 The Future Korea Party (FKP) named Rep. Won Yoo-chul as its new chairman on Friday to resume its nomination process for the April 15 general elections, which had been stalled by its rift with its sister party, the main opposition United Future Party (UFP).

“We cannot afford any more mistakes,” Won, a five-term lawmaker, said Friday in a press conference. “I will quickly resolve the chaos within the party and change the system.”

On Thursday, Rep. Han Sun-kyo, the chairman of the UFP’s satellite offshoot FKP, resigned from the post as the rift between the pair widened over candidate nominations. After the satellite party announced its selection of proportional representation candidates on Monday, UFP Chairman Hwang Kyo-ahn expressed displeasure because his recommendations were largely ignored. After the FKP only offered a few modifications, the party’s electorates, formed by UFP allies, voted down the list, forcing Han to resign.

Following Han’s resignation, other members on the FKP leadership also stepped down, but Gong Byeong-ho, chairman of the FKP nomination committee, said he wants to stay. Won, however, said Friday that he will create a new nomination committee and begin drafting a completely new candidate list.

Four UFP lawmakers including Won left the party on Thursday and changed their memberships to the FKP. With their participation, the FKP now has 10 lawmakers.

Earlier Friday morning, the FKP held a meeting of its lawmakers and named Won as the new chairman. Reps. Jeong Woon-chun and Jang Seok-chun were named as new members of the Supreme Council, while Rep. Yeom Dong-yeol was named as the new secretary general. Rep. Kim Ki-sun was named the chief policymaker.

UFP Chairman Hwang on Friday dismissed Han’s accusation that he had pressured the former chairman of the satellite party to nominate his allies. “I didn’t cross the line,” Hwang said.

“The UFP and FKP are sister parties,” Hwang said. “We naturally have discussions.”

After resigning from the FKP chairmanship, Han told the media that Hwang had pressured him to nominate former lawmakers Park Jin and Park Hyeong-joon as proportional representation candidates.

The UFP on Thursday nominated Park Jin to Gangnam B District of Seoul.

Meanwhile, Busan police said they found Kim Won-seong, a member of the UFP Supreme Council, after he left a suicide note and went missing. On Thursday, the UFP canceled its nomination of Kim, a political rookie, to Busan’s Buk-Gangseo B District and allowed Rep. Kim Do-eup to seek re-election in the constituency. The party said there were allegations against Kim Won-seong of sexual crimes.

According to the police, Kim wrote a three-page note to his wife and left his home in Busan at around 3:35 a.m. Friday. His mobile phone was turned off, and his family informed the police. In the handwritten note, he claimed his innocence.

The police found him around 12:40 p.m. at a religious facility in Yangsan, South Gyeongsang.

The UFP named him as the sole candidate for the district on March 6, after Kim Do-eup said he won’t seek re-election during the course of the conservative merger. Thirteen days later, the party canceled the nomination and allowed the lawmaker to run again.

After his nomination was canceled, Kim Won-seong said it was unprecedented foul play and a smearing initiative by Kim Do-eup.