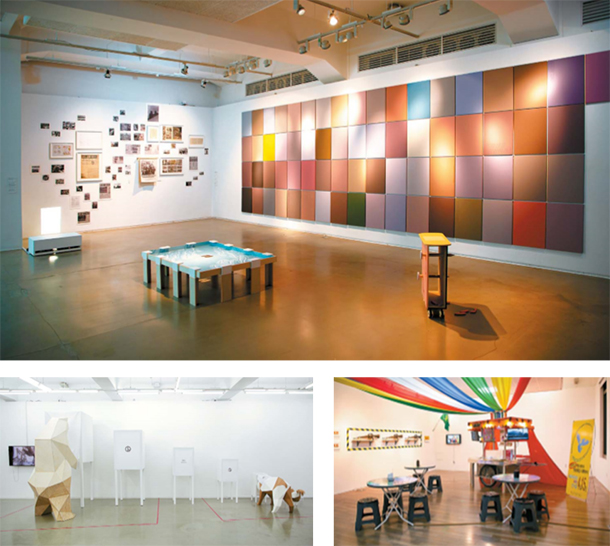 The Ilmin Museum of Art in central Seoul presents “The Better Man 1948-2020: Pick Your Representative for the National Assembly” with the National Election Commission that takes a look at the meaning of elections and voting. At top is the first section, “Who is the Patriot?” Above is “Animal Party Manifesto” by Edongshi. At right is “Gwanghwamun Gymnasium - ‘Memories of Injustice’” by Jung Yun-sun. [ILMIN MUSEUM OF ART]

Remember to bring your ID and wear a mask, and you’re all set for the general elections scheduled for April 15. But before you go, have you ever thought about what elections mean for us in this day and age?

The Ilmin Museum of Art in Gwanghwamun, central Seoul, has prepared a special exhibition in cooperation with the National Election Commission ahead of the upcoming elections. Titled “The Better Man 1948-2020: Pick Your Representative for the National Assembly,” the exhibition will run through June 21 in the heart of central Seoul. An exhibition from the National Election Commission might sound like a textbook introduction of what elections are or a boring layout of historical archives, but in fact, the special exhibit is far from a dry rendition of voting rights.

Using the commission’s archive, 21 teams of contemporary artists have created their own interpretations of the meaning of elections and what it means for someone to represent your voice. Some 400 pieces of data are on display, spanning the period from the very first election in 1948 through the 19 presidential elections and 20 general elections that followed.

And using those pieces of posters, letters, election papers and other records, artists have created what the museum has dubbed “an archival social drama,” hinting at the participatory event that, similar to an election, can only be completed with the participation of the viewers.

“The National Election Commission first suggested an exhibition using both its archival and contemporary art last year in September,” said Cho Ju-hyun, the chief curator of the exhibition. “It wasn’t the archive itself that was appealing - it was the visual aspects it carried, like the design, that appealed to us. The younger generations don’t take politics as seriously as the older ones - they rather consume it as a subject for their internet memes. So in this context, it was a chance for us to think about how they will react to the political issues and think of the election culture in a new light.”

The exhibition takes place across five floors of the museum, starting in the first floor under the section, “Who is the Patriot?” The narrative begins by looking at how the act of voting was related to patriotism, a powerful tool to influence the Korean people during the 20th century. Patriotism was, and still remains to this day, a key to moving Korean people’s hearts. The concept has been used by both conservative and progressive parties throughout history, even including the two military dictators Park Chung Hee and Chun Doo Hwan.

So if all the politicians used the same method to voice different opinions, can we tell them apart? And if in democracy the victory goes only to the vast majority, how will minorities ever find their voices? Can’t we just vote for people on the basis of their promises?

These are some of the questions that the works pose, for instance with team Nolgong’s “I will make it happen!!!” which has people re-enact past presidential elections while only making choices based on the candidates’ main promises. The machine tallies the vote results and compares it with the actual results in history.

On the other hand, Choi Ha-neyl’s installation “Korean Dream” views the act of voting through the eyes of minority communities whose views are often silenced in Korean society: LGBTQ people, single mothers, refugees and foreign laborers. Han Sol’s installation “Boy’s Don’t Cry” similarly turns to the perspective of individuals whose lives are affected by the election results and the important details in life that often get ignored in the political debates.

But viewers won’t find any answers to these questions and hypothetical situations, as the Public Official Election Act prohibits any possibility of affecting votes.

“One of the hardest things about this exhibition is that we had to eliminate anything that could have affected the upcoming elections,” said Park Hye-soo, one of the participating artists who also curated the archive displays. “So we weren’t allowed to use any data from after 1987 because a lot of that still has political influence. It actually made us think about the importance of freedom.”

But apart from that, Choi Jung-ju, deputy director of the National Election Commission, said the commission provided as much room for free expression to the artists as it could.

“This is not our first archive exhibition, but we wanted to break free of the formulated content like we had in the past,” said Choi. “Since we have the elections coming up, I think it will be a great chance for the general public to think about the importance of voting.”

Besides the exhibition, there are complementary programs for people to participate in, such as the weekly performances on Wednesday. Ilmin is closed every Monday. The exhibit is free.