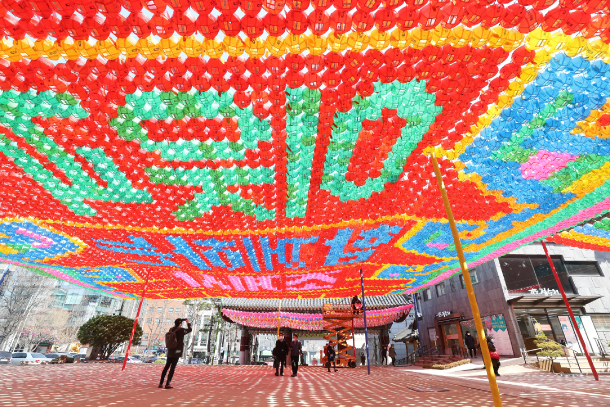 Lights hanging at Jogye Temple in Jongno District. The upcoming celebration of Buddha’s Birthday, on April 30, has been pushed by month until May 30. [YONHAP]

The outbreak of coronavirus has forced the celebration events for Buddha’s Birthday to be delayed until May 30.

The Jogye Order of Korean Buddhism and other orders have agreed to push back the celebration, originally for April 30, as part of an effort to limit the spread of the new coronavirus by avoiding religious gatherings.

Yeondeunghoe, one of the biggest Buddhists’ celebrations with lights, has also been pushed to May 23 from the original April 25.

The orders said this is the time to commiserate with the the citizens are feeling as the country struggles through a national crisis.

Buddhists monks and related entities have encouraged people to limit their everyday religious activities in cooperation with local temples nationwide.

While all the major events have been pushed back, Buddhists monks in the meantime will use that additional month to pray for healing and recovery from the coronavirus.

“Instead of wasting time on where the [poisoned] arrow came from or who shot it, Buddha has given us a lesson that it is more important to take time to help save the dying people from being shot,” said Buddhist monk Wonhaeng, encouraging others to join the movement focusing on how to heal.

Meanwhile, Christians who were gearing up for the April 12 Easter celebration are reconsidering as well. United Christian Churches of Korea has pushed back its Easter parade by about two months. Other celebrations are also expected to go online.