True heroes of the Olympics

True heroes of the Olympics 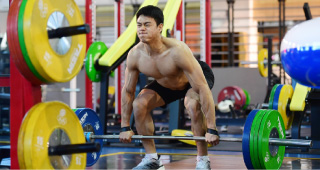 A weight lifting athlete is preparing for the 2020 Tokyo Olympics at the National Sports Center in Jincheon, North Chungcheong. [JANG JIN-YOUNG]

LEE DONG-HYUN
The author is a deputy editor of the industry team of the JoongAng Ilbo.

Seoul’s competitor in the 1988 Olympic bid was Nagoya, Japan. As the third-largest city in Japan, it was known as the “middle capital” for being located between Tokyo and Kyoto after the Edo period.

Considering the economic power and international reputations of Korea and Japan at the time, Seoul’s hosting of the Olympic Games was surprising news. Japan objected to the decision, but hosted the Winter Olympics in Nagano 10 years later.

Cities that hosted the Olympics in recent years ended up with tremendous financial deficits. The 2018 PyeongChang Winter Olympics was supposed to bring 65 trillion won ($52.2 billion) in economic impacts, but I cannot say whether it was a “profitable business,” except that it was meaningful to host the Winter Games after three tries. Korea got to host both the Summer and Winter Olympics.

So the International Olympic Committee (IOC) has struggled to find a host city recently. Japan has hosted three games — summer in Tokyo in 1964, winter in Sapporo in 1972 and winter in Nagano in 1998 — and it is a regular in the Olympic bidding process. The IOC welcomes Japan’s participation.

Japan was scheduled to host the Summer Olympics in Tokyo in 1940, but with the Sino-Japanese War and World War II, the event was canceled. If it had been held as planned, the late marathoner and world-record holder Sohn Kee-chung could have had two consecutive wins. Of course, he would have suffered the pain of not being able to represent Korea, as it was during the Japanese occupation.

Despite the words of cancellation and postponement, the IOC has decided to hold the Tokyo Summer Olympics as planned. As the Covid-19 virus has become a pandemic, the criticism is harsh.

Five Olympic Games — three summer events and two winter events — have been canceled since the first modern Olympics in 1896, during World Wars I and II. Canceling or postponing the Olympics because of the coronavirus epidemic would be unprecedented.
Those who are most troubled must be the Olympians around the world who have trained for the Games for over the past four years. While the Olympics is far from the true Olympic spirit and is more associated with the astronomical broadcasting fees, the athletes who present an unscripted drama are the true heroes of the Olympics.