[DEBRIEFING] Shareholder siege of Hanjin KAL, by the numbers

[DEBRIEFING] Shareholder siege of Hanjin KAL, by the numbers 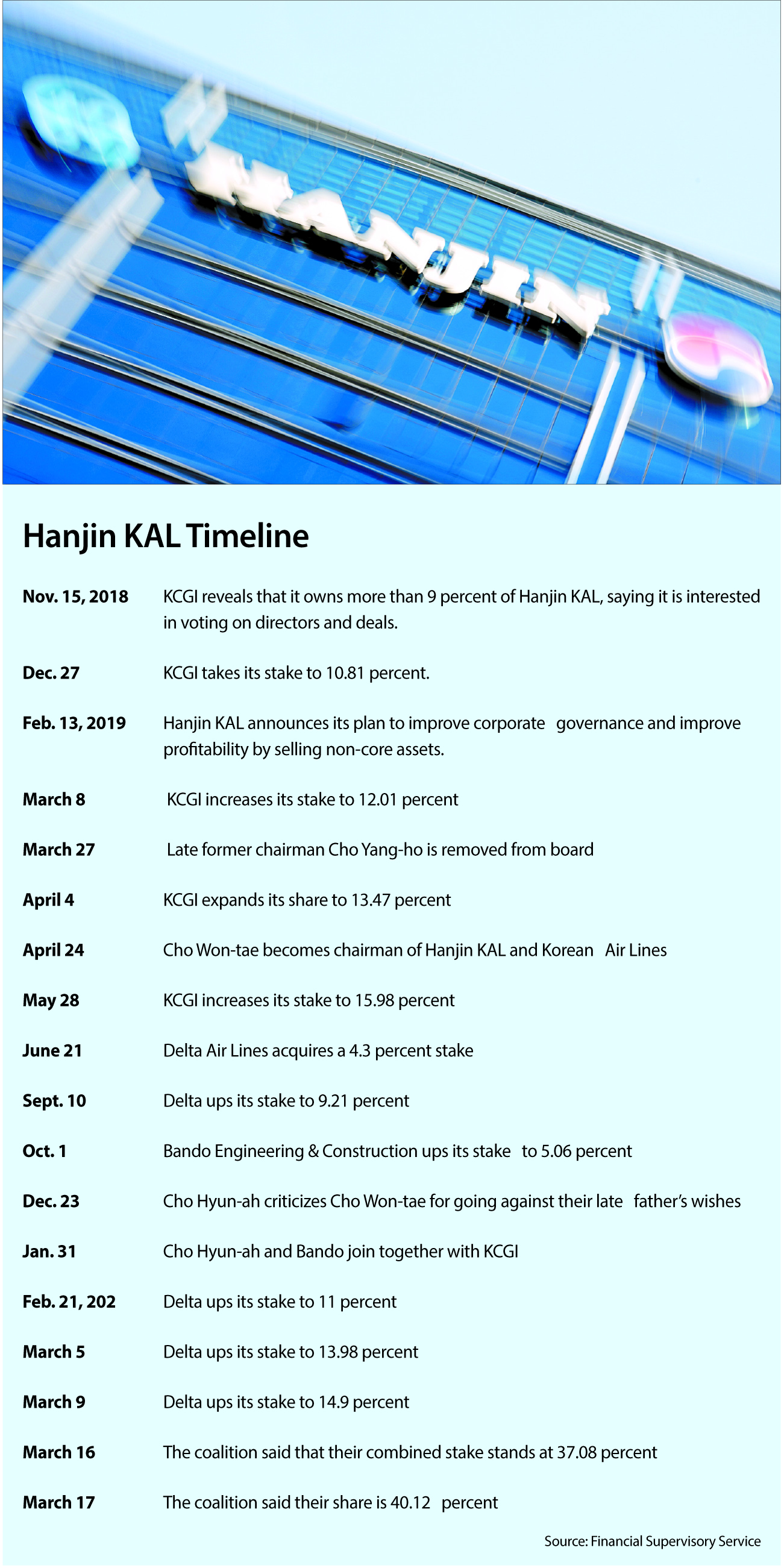 In Debriefings, the Korea JoongAng Daily discusses a topical issue in-depth in a Q&A format. In this Debriefing, we look at the battle for control of Hanjin KAL. The annual shareholder meeting of the company is just a week away, and the challengers own 40 percent of the company’s shares.

The story of Hanjin KAL is transforming from one of intrigue, politics and family drama to little more than a numbers game: Who has enough votes to control the company?

At the shareholder meeting scheduled for Friday, a group of insurgent shareholders will attempt to take control of the board and replace Chairman Cho Won-tae with a professional manager. They have been adding to their position and are close to having enough votes to achieve their goal.

The history to the battle is fascinating, and there’s much to comment upon. It includes a family feud, various crimes and misdemeanors, acts of minor violence and generally bad behavior.

But on Friday, none of this really matters. It comes down to the votes: whether one side has enough to dislodge the other. Half a century of family control comes down to yeas and neas.

In this debriefing, we try and separate the myth from the math.

1. The Hanjin KAL annual shareholder meeting is a big deal this year. Why all the fuss? Is it that important to Korea?

At first glance, it might seem to be just one of the many proxy battles between investors and the board of directors. But it is a bit more significant when looked at in context of the changing landscape of corporate Korea. The family-oriented chaebol system is moving toward a more modern and transparent system of corporate control and management. With family control falling and becoming fragmented as a result of inheritance, and after years of underperformance, the arrangement is under attack. Outside investors are beginning to fall into line against historical control and the running of these public entities like private companies.

While other attacks have been made on chaebol, they have often involved foreign companies. The siege of Hanjin KAL involves a local investment fund, a local construction company and a relative of the current chairman. It also involves a sizable shareholding, with the challengers owning more than 40 percent of the company.

2. O.K. So who owns what and how are they aligned?

Chairman Cho Won-tae owns a 6.52 percent stake in Hanjin KAL as of March 20. Depending on how you add up the shares, and what assumptions you make, his side might control almost 38 percent of the company. Cho Hyun-min, his sister, has 6.47 percent of the shares, and she is on his side, as is his mother, Lee Myung-hee, with 5.31 percent. Another 4.14 percent of the shares, owned by other family members, executives and related companies, support him. Delta Air Lines has 14.9 percent of Hanjin KAL’s stock. It is not clear where the company stands, but the market has assumed that it will fall in behind the current chairman. If everyone stays onside, the chairman has 37.68 percent.

Three shareholders are lining up against the chairman. They are the chairman’s sister, Cho Hyun-ah, with 6.49 percent, the Korea Corporate Government Improvement (KCGI) fund, with 18.68 percent, and Bando Engineering & Construction and related companies, with 14.95 percent. That comes to a grand total of 40.12 percent.

One additional wrinkle is the timing. Only shares bought before the closing of the shareholder list count. So that makes it 31.98 percent in KCGI’s corner and 33.45 percent in the chairman’s.

3. So what is the KCGI/Cho Hyun-ah group trying to do exactly, and what are their odds of doing it?

They want to replace the whole board, oust the chairman and install professional management, ending the Cho family’s tradition of being both shareholders and managers. The group has named seven board nominees. Here is where the math gets challenging. Only two board seats are open, and to get a nominee appointed, half the shareholders must vote “yes” for them - and the votes must also equal more than a quarter of the shares outstanding.

It is also made complicated by the fact that the company has no required number of director seats, so more can always be added.

4. What else are the challengers doing?

To discredit Cho Won-tae, the coalition has accused him of generating losses and being involved in a bribery case. The challengers said that the chairman played a role when Airbus bribed Korean Air Lines to secure contracts from 1996 through 2013. Hanjin KAL has denied the allegation.

5. Tell me more about Delta. Why did it buy so many shares, and what is it up to? Are we sure that it will always support the chairman?

Delta Air Lines has offered vague guidance about its intentions in disclosure documents. It says it is simply acquiring the shares as an investment. But the company has close and long business relations with Hanjin KAL and Korean Air Lines. It has a comprehensive business partnership with the Korean company, in which the two carriers act as one on certain routes.

Delta Chief Executive Ed Bastian said in a statement that the investment will further strengthen the relationship.

The Korea JoongAng Daily sent an email requesting more detail, but no answer has been received.

Delta Air Lines clearly wants its partner to be stable and well-run, and that suggests that it will stick with the chairman to maintain continuity. It is also worth noting that Delta Air Lines is a public U.S. company that needs to satisfy the demands and interests of its own shareholders, so it needs to do what makes Hanjin KAL most valuable.

6. Where does the National Pension Service (NPS) stand? What are its interests, and how is it voting? Is it really capable of freely exercising its vote?

The NPS with around a 2.9 percent stake emerged as the key shareholder. The pension operator hasn’t announced its decision.

But it is impossible to know whether the NPS will follow their advice. Following the adoption of a stewardship code, a set of guidelines aimed for active shareholder engagement to ensure responsible corporate management, the pension fund sometimes says “no” to proposals. One of the notable examples was when it went against the reappointment of the former chairman of Korean Air Lines, the late Cho Yang-ho, as a director of the airline.

As for the independence of the fund, many believe it can never be free of political influence, because the head of the top decision-making body is chosen by the Minister of Health and Welfare.

7. According to my calculations, independent shareholders not otherwise aligned own about 30 percent of the shares. What are they doing and how are they thinking?

Minority shareholders not already committed own nearly 30 percent of the shares in Hanjin KAL, so winning them over is important for both sides. The head of an online community representing more than 600 minority shareholders interviewed by broadcaster SBS CNBC last week said that its members are siding with the chairman. But other shareholders may not share that view.

8. What other companies in Korea, if any, are facing similar battles?

Funds have been working to crack the chaebol for about 20 years, but they have never won a decisive victory. New York City’s Elliott Management took on Samsung Group companies in 2015 and Hyundai Group companies in 2018. In both cases, the results were mixed, though the fund’s efforts did seem to have had an influence on the boards of the affected companies.

9. I have avoided the family drama thus far so we can best understand the mechanics behind the attempted boardroom coup. Tell me about the family drama and what it means for the takeover attempt.

The conflict became highly publicized last December when Cho Hyun-ah criticized Cho Won-tae of going against their late father’s wishes. At the time, she noted that the patriarch “wanted the family to cooperate and run the business together.” Cho Hyun-ah was stripped of her vice president position and other roles at Korean Air Lines in December 2014 after an incident at John F. Kennedy International Airport where she forced a plane to return to the gate due to her dissatisfaction with the crew. This is the so-called nut rage incident.

Cho Hyun-min, the sister, was involved in an assault case in 2018 but returned as an executive director at Hanjin KAL.

10. As all this is happening, the airline business globally is collapsing. How is Korean Air Lines doing?

Korean Air Lines is one of the hardest hit by the coronavirus outbreak. As many of the routes and schedules are suspended, its profitability will likely be severely affected. Its stock price has been on the decline since the outbreak. The stock is trading at its lowest level since about 2003.