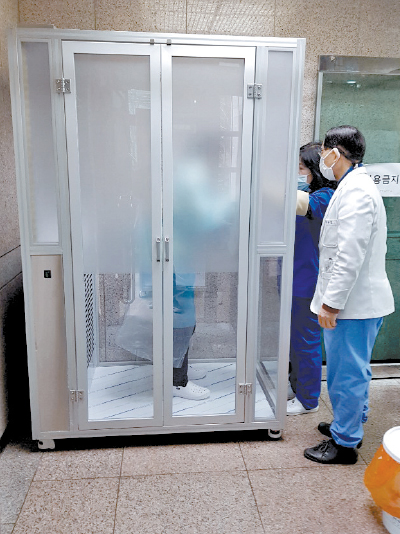 Ahn Yeo-hyun, a medical doctor at the Nam District Health Center in Busan, demonstrates how to take samples from the negative air pressure booth. [LABSEED]

Korea has introduced a phone booth-style testing facility that officials say will allow suspected coronavirus patients to be tested more cheaply and efficiently.

The booths allow medical staff to quickly and safely collect samples from suspected patients behind the plastic panel and reduces the post-test sterilizing process to a minute.

This pioneering idea came from Ahn Yeo-hyun, a 41-year-old a medical doctor at the Nam District Health Center in Busan. As the coronavirus pandemic worsened in February, Ahn began looking for new ways to reduce the risk of infection to medical workers within the existing negative pressure tents and sample collecting.

“The booth guarantees safety by completely separating the test subject and the medical staff and saves materials, such as protective clothing, and time,” Ahn said. “It took us a month to come up with the idea and build the actual product.”

Testing inside negative air pressure tents forces medical staff to take samples of suspected patients in the same space. The process of sterilizing the tents and circulating air to kill viruses before admitting the next patient has proved time-consuming, and additionally the cost of the tents averaged about 24 million won ($19,000) per unit.

Before working at the Nam District Health Center in Busan since 2016, she majored in anesthesia and pain medicine and worked at Inje University Ilsan Paik Hospital and Busan Korea Hospital.

The sample-collecting booths introduced after the Middle East respiratory syndrome, or MERS, outbreak in 2015 often resulted in inaccurate test results, as patients had to collect the samples themselves.

“While accurate sampling is more important than anything else for infectious diseases, chances of failure are high if patients are to take their samples,” Ahn said.

To address this problem, she sketched out some ideas on paper in early February, when the coronavirus began spreading more aggressively throughout the country. She made a prototype with acrylic plates and installed the booth inside negative air pressure tents. After testing her idea through the end of February, she asked a laboratory safety product manufacturing company, Labseed in Ansan, Gyeonggi, to make her customized testing booth.

Labseed finished the product in early March. It is a small negative air pressure booth in which a single person can fit. It contains a glove box-like attachment, through which a medical worker can put their hands into the booth to collect the sample, while a glass panel keeps them separate. Only the medical worker’s gloves need to be changed after sampling, and due to the small booth space, the air circulates fast enough that it only takes a minute to sterilize.

The booth measures 1.3 meters (4.3 feet) in width, 0.8 meters in length and two meters in height. It weighs 160 kilograms (353 pounds), and the attached wheels allow it to be easily moved by two adults.

They also carry a price tag less than half the cost of a negative air pressure tent - about 10 million won.

With news spreading that the booths were distributed in Busan, health centers across the country have begun asking Labseed to duplicate the idea. So far, 13 health centers and hospitals are using the new testing booth or plan to begin using them soon.