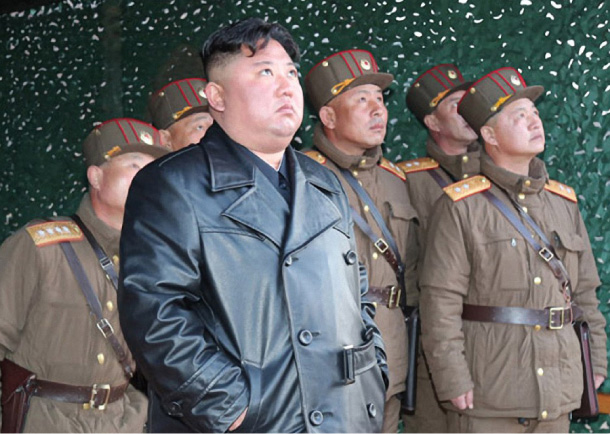 The “demonstration fire” of this weapon was personally ordered by North Korean leader Kim Jong-un to show the “tactical characters and power of a new weapon system to be delivered to [Korean Peoples’ Army] units,” read an English-language report from the regime’s official Korean Central News Agency (KCNA).

According to South Korea’s Joint Chiefs of Staff (JCS) on Saturday, the rockets were launched at 6:45 and 6:50 a.m. from a location near Sonchon in North Pyongan Province. Both projectiles flew distances of around 410 kilometers (255 miles) at peak altitudes of around 50 kilometers before landing in the East Sea.

Kim stressed the new weapons the regime had developed and tested recently were designed to “make a radical change in the national defense strategy,” KCNA said.

“We must further build up the striking capability which can wipe out any enemy out of our territory if it dare designs to launch a military action against our state […] the most perfect strategy for national defence and most trustworthy war deterrent,” Kim added.

While the KCNA report said Saturday’s test had “clearly proved the characters of different flight trajectories and falling angles, accuracy of guided shells and their power,” few details were provided on the weapon’s capacity.

Accompanying the report was a photograph of the test showing a rocket being launched from a transporter erector launcher (TEL), a vehicle used to fire surface missiles. Two other photographs showed explosions on a rocky islet that KCNA claimed was the target of the two launches.

South Korea’s military and analysts noted the weapon’s physical appearance resembled a weapon the North tested on August 10 and 16. Seoul’s JCS said it was analyzing whether Saturday’s weapon was a surface-to-surface missile system akin to the U.S. MGM-140 Army Tactical Missile System, or Atacms, which is believed to be the model for the weapon unveiled in August’s tests. 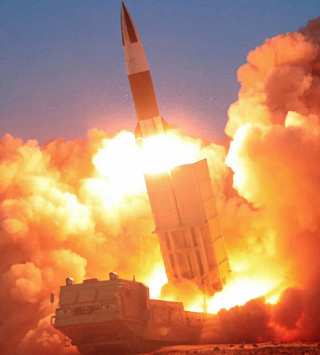 A photograph of the test shows a rocket being launched from a transporter erector launcher (TEL). [YONHAP]

The warhead of the Atacms Block 1 missile contains around 950 M74 cluster bomblets that can wipe out an area equivalent to three or four football fields.

If North Korea has successfully developed such a weapon, it may, along with its new KN-23 and large caliber multiple launch guided rocket launchers, possess the capacity to neutralize the South’s Korea Air and Missile Defense (KAMD) and Kill Chain preemptive strike systems.

Saturday’s test marked the third time North Korea conducted a possible short-range missile test this year, carried out in relatively quick succession from March 2 and March 9. The North said the two earlier tests were part of an annual artillery drill, but no mention of the exercise was given in Sunday’s KCNA report.

Pyongyang could be in the final stages of testing the weapon before it is deployed to its military units on the border with South Korea, said experts in Seoul.

“If the development testing [for the weapon] was successful, there is likely to be an operational launch in the near future,” said Hong Min, a leading North Korea researcher at the South’s government-run Korea Institute for National Unification. “The weapon may surface at an actual military training exercise in the summer rather than another test from the North’s defense research agency.”

Hong also noted the 5-minute interval between the two launches on Saturday was significantly shorter than in tests in August, in which it took 25 minutes and 15 minutes to fire a second rocket after launching the first.

A different weapon the North tested twice earlier this month, which is believed to be a multiple rocket launcher system, also showed signs of major improvement in terms of reloading times, taking only 20 seconds between each launch.