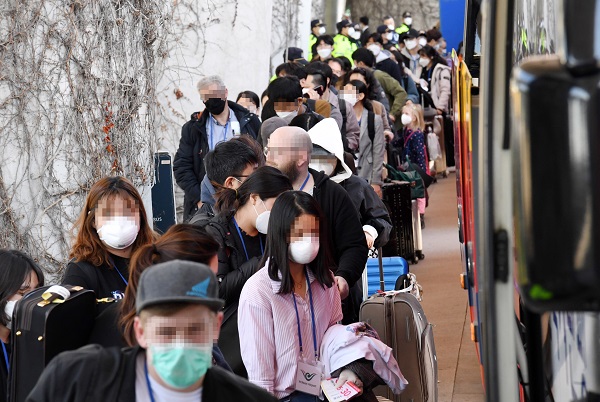 Passengers who arrived at Incheon International Airport, west of Seoul, on a flight from Frankfurt board a chartered bus that will take them to a testing center for the new coronavirus on Sunday as the South Korean government tightened its quarantine procedures for inbound travelers from Europe. [YONHAP]

Korea began testing all travelers coming from Europe for the coronavirus Sunday — Korean nationals and foreigners alike — and holding them for 24 hours until the results of their tests come through.

Even after that initial test, all travelers will have to go into 14 days of self-quarantine or government quarantine — even those who are confirmed negative for the disease.

Travelers coming into Korea from Europe will be separated into two groups: people showing symptoms and people without symptoms.

Those without symptoms will be transported by bus to one of seven temporary accommodations arranged by the government near Seoul where they will stay for 24 hours and be tested.

Passengers with symptoms will be tested in a separate quarantine facility.

People who have somewhere to stay in Korea who test negative will be required to self-isolate at home for two weeks. People who don’t have a residence in Korea will be isolated at government-arranged facilities.

Both Koreans and foreigners who do not abide by self-isolation can face a fine of up to 3 million won ($2,400).

Korea expected around 1,000 passengers coming from Europe Sunday, with flights scheduled from Frankfurt, London, Amsterdam and Paris. They were informed of the new regulations before boarding flights.

There were over 307,000 confirmed cases globally and 13,000 deaths as of Sunday, according to the Johns Hopkins University’s Center for Systems Science and Engineering.

The United States also has over 26,000 confirmed cases and over 320 deaths, and California and New York are among states that are forcing nonessential workers to stay home.

Korea has seen a slowdown in new cases and the daily rate of infections were generally in the double digits in the past week, with the exceptions of Wednesday and Friday.

The Korea Centers for Disease Control and Prevention (KCDC) said Sunday that 98 new cases were tallied Saturday, bringing the nation's total infections to 8,897, and a total of 104 deaths.

Health authorities also continue to remain cautious of cluster infections especially with recent outbreaks at a call center in Guro District in western Seoul and a Protestant church in Seongnam, Gyeonggi.

The Korean government starting Sunday called for the suspension of religious, entertainment and indoor sports activities for 15 days through April 5 in order to contain the coronavirus. In case their operation is inevitable, then they are expected to abide by quarantine authorities’ measures or be penalized.

Prime Minister Chung Sye-kyun in a press conference Saturday made the announcement strongly urging to suspend such activities Saturday, stressing the importance of social distancing for the next two weeks calling it a “critical” period.

The government postponed the new school year three times already, so the following two weeks are critical for the schools to reopen without another delay on April 6.