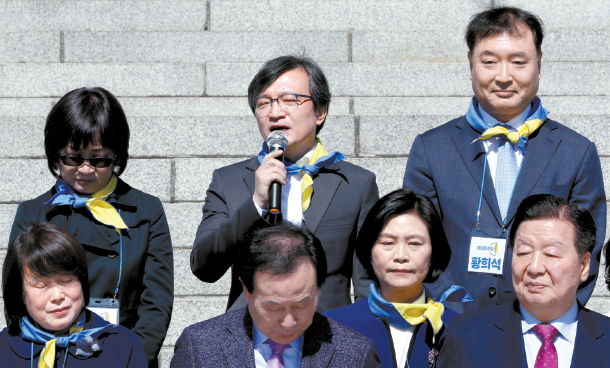 The leader of the ruling Democratic Party (DP) said Monday that it is possible to form an alliance with the Open Democrats, a controversial political party newly formed by its former members, after the April 15 general elections.

“The DP may not win the most number of seats,” Lee Hae-chan said in a radio interview in the morning. “But we can form an alliance with [the Open Democrats] when we organize the standing committees.”

Lee said it is realistically unfeasible for the two parties to merge. “In case of a merger, they will lose their own identity,” he said. “Therefore, they will try to remain independent.”

The Open Democrats was launched on March 8 by a former DP lawmaker Chung Bong-ju, who failed to win the ruling party’s nomination in the April elections over controversies including a sexual harassment scandal. He declared that he won’t run, but formed the new party to win proportional seats.

The Open Democrats held a press conference at the National Assembly on Sunday and announced its list of 20 proportional representation candidates, including several controversial politicians.

Among them was former presidential spokesman Kim Eui-kyeom, who resigned last year after an explosive backlash to reports that he had dabbled in real estate speculations, possibly with inside information. Kim declared his bid to become a lawmaker in December 2019, but gave up his ambition as the DP was reluctant to award him a nomination.

Kim, however, recanted his promise to not run and joined the Open Democrats to become a proportional lawmaker. “I have seen so many articles that attack the president or encourage conflicts and splits of our society,” he said Sunday. “I want to reform the press.”

Choe resigned last week from the powerful Blue House post, the deadline for public servants to step down to run as proportional candidates. He said he wants to reform the prosecution and the press if he becomes a lawmaker.

Hwang Hee-seok, former director of the Human Rights Bureau of the Ministry of Justice, was also nominated as a candidate of the Open Democrats. “The Cho Kuk crisis last year was a coup by the prosecution if you want to say it more accurately,” Hwang said at the press conference. “I tried hard to end the coup. Now, I am running to complete the prosecutorial reform this year with a new title.”

Until he resigned from the ministry in January, he was the head of the team to reform the prosecution.

The Open Democrats did not allocate the candidate numbers to the 20 nominees. It held a vote with its members to prioritize the candidates on Sunday and Monday, and the list and the order will be finalized Tuesday.

“The launch and the candidate nomination process of the Open Democrats are extremely inappropriate,” said DP Secretary General Yoon Ho-joong on Sunday. “It is extremely regretful that its 20 candidates include the people who were disqualified by our party or declared to not run ahead of expected disqualifications.”

Despite the sentiment, the Open Democrats will likely become an ally of the DP if it wins any seat. Kim, former spokesman of President Moon, said in a radio interview on Monday that the alliance should be considered to smoothly conclude the prosecutorial reform, particularly the launch of a new investigation agency for senior public servants.

According to the law governing the new agency, a seven-member panel will recommend candidates for its head. The panel includes the justice minister, the minister of court administration and the head of the Korean Bar Association. In addition, the ruling and opposition negotiation blocs will each nominate two.

If the Citizens Party and the Open Democrats form a coalition, they will be able to appoint one of the two panel members earmarked for the opposition. The DP, therefore, will have control over six members on the panel, practically having the right to appoint the new investigation agency head.

Woo Hee-jong, a co-chair of the Citizen Party, also said in another radio interview that he supports such an idea. “If that works for the prosecutorial reform, I think that is good, based on the general election outcome,” he said.