64 new cases of coronavirus on Monday, some from abroad

64 new cases of coronavirus on Monday, some from abroad 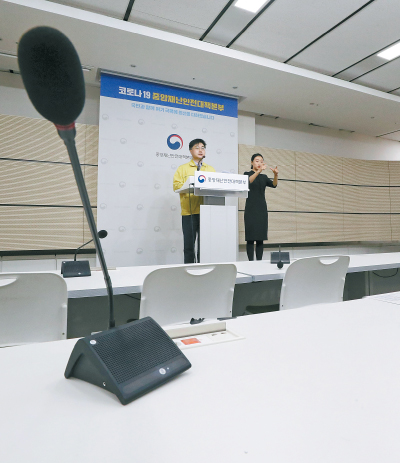 The Korea Centers for Disease Control and Prevention gives an online briefing without reporters for the sake of social distancing in the briefing room of the Ministry of Health and Welfare in the Central Government Complex in Sejong on Monday. [NEWS1]

According to the Korea Centers for Disease Control and Prevention (KCDC), seven more people died from complications related to the coronavirus, putting the total number of fatalities in Korea at 111.

Of the new patients, 24 were from Daegu, 14 from Gyeonggi and six from Seoul - numbers markedly lower than in the previous week, when the capital saw a spike in cases owing to outbreaks in some clusters. A total of 13 of the new cases were people returning from abroad who had been found infected with the virus after being tested at Incheon International Airport.

The number of people released from quarantine after recovering from the virus reached 3,166, far outpacing the number of new infections. The rapidly growing number of recoveries in recent days has raised the recovery rate to 35.8 percent on Monday, according to the KCDC.

One of those discharged was a 93-year-old woman living in a nursing hospital in Gyeongsan, North Gyeongsang, who after 13 days of treatment at a hospital in Seoul tested negative in two separate tests.

She is the oldest person in Korea to have recovered from Covid-19, health officials said, noting that she had no significant underlying diseases that could have worsened her condition.

While the disease’s spread has markedly slowed since major spikes in February, health officials on Monday stressed numbers meant little unless infections in clusters were contained.

“The nature of Covid-19 is such that even if we are a little lax, there could be cluster infections,” said Yoon Tae-ho, a senior Ministry of Health and Welfare official, at a press briefing on Monday. “What is most important is how to stop sporadic cluster cases [domestically] and infections spread by people coming from abroad.”

Around 81.1 percent of all virus cases in Korea have been linked to cluster infections, and 56.4 percent have been associated with the controversial Shincheonji Church of Jesus, said KCDC Director Jung Eun-kyeong.

In Daegu, 12 new cases were discovered at a nursing hospital that has so far produced 78 cases. Nursing hospitals in the city have been particularly hard hit by cluster infections, and government efforts to contain the virus have been focused on medical institutions.

With religious services emerging as major hot spots of contagion in recent days, the government on Monday also stepped up measures to enforce its guidelines on social distancing among the public.

Prime Minister Chung Sye-kyun in a morning health meeting warned that “stern legal action” would follow for churches in the country that have violated government orders against mass gatherings.

The remark came in response to decisions by hundreds of Protestant churches across Korea to hold services on Sunday in spite of government orders against large public gatherings.

“[Such meetings] are actions that threaten not only the individuals partaking in them but also the safety of our entire community,” Chung said. “Now is a time of emergency akin to a state of war, so executive orders should not be lightly regarded as a bluff.”

On Saturday, Chung issued an administrative order calling for the suspension of religious, entertainment and indoor sports activities for 15 days from Sunday through April 5 - which the prime minister said was a “critical period” to contain the coronavirus. In case the activities must be held, organizers are expected to abide by quarantine authorities’ measures or be penalized.

In spite of the order, hundreds of Protestant churches across Korea held services on Sunday without following health guidelines. The Sarang Jaeil Church in northern Seoul, best known for its strong conservative leanings under its now-jailed pastor Jun Kwang-hoon, was singled out by Chung, who said the church should be subject to legal punishment for violating city ordinances banning mass rallies.

The Sarang Jaeil Church held a Sunday worship service to criticize the Moon Jae-in administration along with other right-wing groups in open defiance of the central and local government’s antiviral measures. Members of the church reportedly hurled insults and shouted at public servants dispatched to observe whether health guidelines were being followed.

Seoul Mayor Park Won-soon at a press briefing on Monday called the church’s actions “intolerable” and said he issued an order banning the church from holding any gatherings or services for two weeks until April 5.

The KCDC on Monday further warned of false information circulating with regard to the virus, noting in particular a cluster of cases at a church in Gyeonggi where worshippers’ mouths were sprayed with a saltwater solution and a case in which a person became sick after industrial alcohol was used for disinfection purposes.

“Incorrect information that has not been verified medically can be even more dangerous than the virus, so it is important to check whether the source of that information is trustworthy,” Jung said.

Medical experts of the National Medical Center (NMC), a government-sponsored institute, on Monday warned that with Covid-19 becoming a global pandemic, the government needed to step up efforts to prevent infections in the long run.

“Only when 60 percent of the population has immunity can [Covid-19] be truly stopped from spreading,” said Oh Myeong-don, chair of the NMC’s new infectious disease central clinical committee. “To raise the population’s collective immunity we can only rely on vaccinations, but in order for a Covid-19 vaccine to emerge, we may have to wait at least 12 months.”