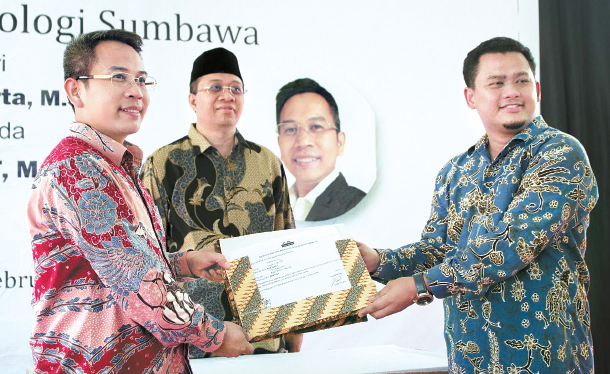 Dr. Chairul Hudaya, left, a graduate of Korea’s University of Science and Technology (UST), receives his certificate of appointment as the president of University of Technology Sumbawa on March 10. [UST]

The newly appointed president of the University of Technology Sumbawa in Indonesia has had quite the journey to reach the prestigious position, not to mention some interesting ties to Korea.

Dr. Chairul Hudaya was born on the Indonesian island of Sumatra, an area with dense tropical rainforests.

While someone who has not visited the island may envision a clear ocean, palm trees, and vast stretches of white sand - which is not an incorrect visualization - there was just one problem: Hudaya’s village had no electricity. In fact, after sunset, it was in complete darkness.

According to Hudaya, this was why he first started his journey of becoming an engineer - to fulfill his dream of bringing electricity to his village.

And become an engineer he did. An exceptional one.

He then accepted a post as assistant professor in the department of electrical engineering in the University of Indonesia soon afterwards.

In 2017, Dr. Hudaya was awarded the Asean Young Scientist and Technologist Award (Aysta), an award given out by the Asean Committee on Science and Technology once every three years to scientists under 35 who have made considerable strides in the sciences.

In the same year that he won the Aysta award, Hudaya was awarded the First Prize of Outstanding Lecturer by the University of Indonesia. These two recognitions, and the stockpile of other awards, attest to Hudaya’s accomplishments as both a researcher and educator.

Lee Joong-ki, a senior researcher at the Center for Energy Storage Research at KIST and Hudaya’s doctorate thesis adviser explained theses are graded based on the Scientific Citation Index (SCI), which measures the impact of a scientific research paper by the number of times it is cited by other researchers. According to Dr. Lee, “For his thesis, Hudaya flew far and above the average doctorate thesis score of 3.59 - within the university - and concluded his studies as a stellar student.”

Dr. Lee has also noted that Hudaya not only excelled in his research, but also has an “exceptional sense for socializing and communication.”

Indonesia is a developing country with a GDP per capita of $5,000. As a result, competition for important positions in academia is less intense. However, this does not undermine Hudaya’s achievement.

According to the UST, the average age of presidents at Indonesian universities is 50. Hudaya became president of University of Technology Sumbawa at 36.

“We have heard from officials at University of Technology Sumbawa that Hudaya was given the post because the university is trying to strengthen its engineering program,” UST said, “and Hudaya was deemed the best person to lead the efforts.”

UST is a coalition of KIST and 32 other government-affiliated research institutes, offering both undergraduate and graduates courses that give students the opportunity to work with the research institute appropriate to his or her research interests.