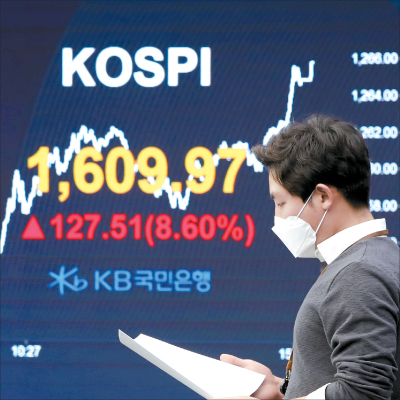 A signboard at KB Kookmin Bank’s office in Yeouido, western Seoul, on Tuesday shows the market closing above 1,600, the first in four trading days as it gained 127.51 points or 8.6 percent compared to the previous day. [YONHAP]

Korea’s stock market rallied Tuesday following a slew of government-led relief measures announced in Korea as well as the United States. Trading had to be halted at one point to contain massive purchases.

A total of 98 trillion won ($79 billion) made its way back to the main Kospi and tech-heavy Kosdaq markets Tuesday.

The benchmark Kospi closed at 1609.97 Tuesday, up by 8.6 percent from Monday’s 1482.46. The 8.6 percent jump is the biggest increase in more than 11 years. The main bourse experienced an 11.95 percent jump in October 2008 in the aftermath of the global financial meltdown.

The Kospi opened with a 2.78 percent gain Tuesday to hit 1,523.69, following the U.S. Federal Reserve’s surprise announcement overnight that it would purchase unlimited amounts of Treasury bonds and mortgage-backed securities under its quantitative easing measures.

The Korean government in the morning said it would expand its fiscal support to 100 trillion won to contain the virus-driven economic fallout in Korea.

Retail investors could see short-term profit as they finally opted for a sell-off Tuesday. It is first time for retail investors to record net sales on the main index since March 4.

Individual investors sold a net 463.8 billion won worth of shares Tuesday, while foreign investors slowed down their selling spree by downsizing net sales to 82.4 billion won. 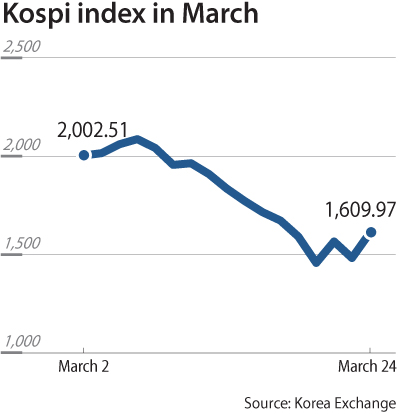 Although the monetary easing failed to reassure the U.S. market, it appeared to lift most Asian markets. Despite the announcement, the Dow Jones index fell by 3.04 percent, and the S&P 500 experienced a 2.93 percent fall.

In Korea, Kospi trading had to be halted at 10:05 a.m. for five minutes as futures for the Kospi 200 index moved by 5.29 percent and stayed there for more than one minute. This is the sixth time this year for a sidecar to be activated in Korea’s main bourse but only the second time due to a bullish run. The first of this type was activated Friday as the market rallied following the currency swap announcement with the United States.

“The market settled for now due to monetary and fiscal policies released around the world,” said Noh Dong-kil, analyst from NH Investment & Securities. “However, seeing that Wall Street indexes haven’t yet shown a rebound, it remains to be seen if today’s rally would be maintained for the long term.”