Calls increase for testing on travelers from U.S.

Calls increase for testing on travelers from U.S. 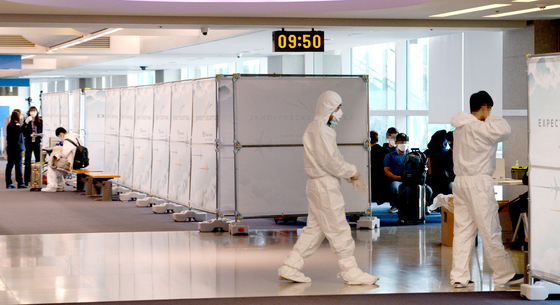 Calls are increasing for quarantine measures to be strengthened on travelers coming into Korea from the United States as more patients entering the country from abroad tested positive for coronavirus.

On Monday, a total of 8,941 people entered Korea, of which 1,884 were foreigners, according to the Korean Ministry of Foreign Affairs Tuesday.

A total of 2,418 people, of which 2,144 were Koreans, came from the United States Monday, twice the amount of people coming from Europe. There were 1,203 people entering from European countries Monday, the second day since Korea has imposed mandatory coronavirus testing on travelers from the region. Around 90 percent of these travelers were Koreans.

But despite twice as many people coming from the United States as Europe, Korea has yet to implement mandatory testing on these travelers.

Korea since Sunday is requiring all travelers who have been in Europe - Korean nationals and foreigners alike - to undergo mandatory coronavirus testing and wait up to 24 hours for results at temporary accommodation designated by the government. Asymptomatic people are separated from symptomatic passengers upon entry. Koreans and long-term foreign visitors, even if they test negative, are required to undergo 14 days of self-quarantine at home or at a government-designated accommodation.

As many return to Korea early from overseas travels and studies abroad amid the global pandemic, there is concern about the steady flow of newly imported cases.

While some are symptomatic and screened at the airport, others develop symptoms later after returning home and carrying on with daily life. There have also been some cases of secondary infections of family members.

The Gangnam District Office Tuesday said that a 23-year-old man, a resident of Daechi-dong in southern Seoul, who had been studying abroad in the United States was confirmed positive after returning from New York on Friday. This patient developed symptoms and went to Samsung Seoul Center to be tested.

The Songpa District Office likewise said that a 23-year-old student who is a resident of Jamsil in southern Seoul returned from the United States Saturday without any symptoms. She later learned that a schoolmate had tested positive for the coronavirus and got tested Sunday. She was confirmed positive Tuesday and transported to a quarantine facility. While she was said to have always worn a mask, she visited a Hanaro Mart among other places in her neighborhood.

The Busan city government also confirmed its first imported case from the United States Tuesday, a 33-year-old woman who arrived at Incheon International Airport last week on March 18 after traveling to Cancun, Mexico, and the United States.

This woman was said to have been symptomatic on the day of her arrival in Korea, but was passed through by quarantine officials because her fever was mild. She went from Incheon to Gimpo International Airport then flew domestically to Busan. Quarantine officials are tracking the route she took and who she came into contact with.

Of 1,444 travelers who came from Europe Sunday, the first day mandatory testing on all passengers from the region was implemented, 19 tested positive for the virus, quarantines authorities confirmed Tuesday.

Korean Prime Minister Chung Sye-kyun said in a meeting on the government’s coronavirus responses Monday that there is a need to “seriously review” whether to take effective, stronger quarantine measures on visitors coming into Korea.

Quarantine officials said Tuesday the government is reviewing whether to expand mandatory testing from travelers from regions other than Europe as well.

But some experts point out that mandatory testing on travelers from the United States is not enough to contain the virus and call for more extreme measures such as the suspension of flights or the issuing of visas for a certain period of time to decrease travelers from the region.

The U.S. Embassy in Seoul last Thursday suspended all routine visa services for an unspecified period of time in keeping with the State Department’s measures to respond to the new coronavirus outbreak. This did not affect the existing visa waiver program enabling tourism or business travel for 90 days or less without obtaining a visa.

On the necessity of travelers from the United States getting tested, a senior Foreign Ministry official told reporters Tuesday, “Many people hold the opinion that there is a great need for this and it is currently being discussed.”

Yoon Tae-ho, a senior Health Ministry official, in a KCDC briefing Tuesday said, “We are currently making preparations for a speedy decision on what to do about people entering the country not just from the United States but around the world, and we will make an announcement on this soon.”

Korea is also working on making sure its nationals stranded abroad can find flights back home should they wish to return.

The Korean government is planning to send chartered planes to Italy, currently under lockdown, to evacuate hundreds of Koreans in Milan and Rome next week amid the worsening situation in Europe. The Korean Embassy in Italy and consulate in Milan said that as of Monday 700 people have expressed a desire to return to Korea. The number is higher than initially surveyed by an association of Korean residents in Italy.

While 179 countries and territories have some form of entry ban or strengthened quarantine measure on Korea, more countries have been seeking Korea’s support in quarantine measures, such as providing testing kits, medical supplies and sharing of its experience in containing the virus.

On Monday, Korean Foreign Minister Kang Kyung-wha held phone talks with her counterpart from the Netherlands, Stef Blok, and explained reinforced quarantine measures for people traveling from Europe and the current downward trend in Korea.

Blok, according to the ministry in a statement, commended Korea’s coronavirus response “through its outstanding diagnostic testing capacity and transparent information sharing” and asked Seoul “to share its successful experiences in disease control and to provide protective equipment.”

Korea saw an exponential increase in new cases in late February but has seen a downturn in new cases for the second week, mostly seeing two-digit increases in new cases. Korea, rather than resorting to lockdowns or entry bans, has paired extensive and quick testing, diagnosis and tracking of contact with transparency to the public.