Focus shifts to infections coming in from overseas

Focus shifts to infections coming in from overseas 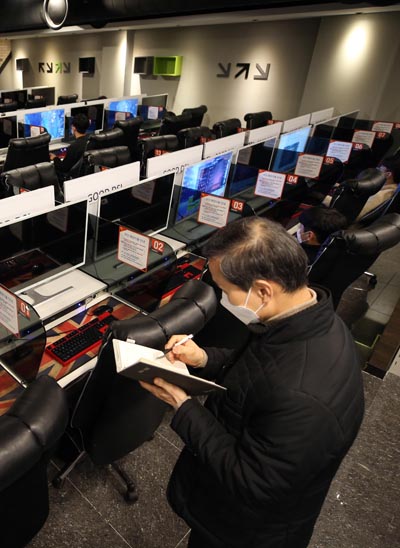 An official in Daegu checks whether people in an internet cafe are observing social distancing guidelines to prevent the spread of the coronavirus on Tuesday. [YONHAP]

At least that’s how it seems after compulsory tests of visitors from Europe began Sunday.

The Korea Centers for Disease Control and Prevention (KCDC) said Tuesday that among 76 new infections tallied in Korea Monday, at least 22 were imported from another country, almost all from Europe. By comparison, 64 infections were counted Sunday, of which at least 14 were imported.

Among the 76 cases tallied Monday, 31 were from Daegu, 20 imported from a foreign country and detected by Korea’s screening systems of foreign arrivals, 15 from Gyeonggi, four from Seoul, two from Busan and one each from Incheon, North Chungcheong, North Gyeongsang and South Gyeongsang. Two people apparently contracted the disease from abroad but didn’t test positive until after they settled in the local society, the KCDC said. 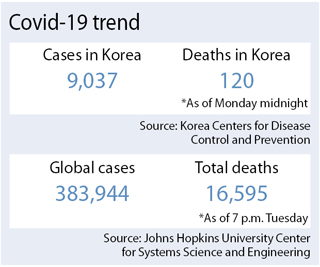 Korea’s total case load now stands at 9,037, the eighth-highest in the world after China, Italy, the United States, Spain, Germany, Iran and France. Korea once had the second-highest number of infections in the world when a large cluster emerged at a church of the Shincheonji religion in Daegu, Korea’s fourth-largest city in the southeastern part of the nation, in mid-February.

But with the outbreak in Daegu and North Gyeongsang now subdued, and subsequent clusters arising in western Seoul and Gyeonggi locked down and traced, local health authorities said Tuesday that Korea should be on the lookout for cases from other countries, especially Europe, where the outbreak continues to spread.

Among Korea’s total cases, about 1.9 percent, or 171 cases, have been traced to a foreign country including China, but health officials believe the figure will increase as more Korean nationals return home from Europe and the United States to escape their outbreaks.

By Monday midnight, 120 coronavirus patients had died, up by nine from the previous day, while 3,507 people were declared fully recovered, 341 more than the day before. The KCDC said Tuesday afternoon that 62 patients were in critical condition.

“I think many people feel relieved now that we’ve been seeing less than 100 daily new infections over the past three consecutive days,” Yoon Tae-ho, a senior official of the Ministry of Health and Welfare, said Tuesday in a press briefing.

“But people shouldn’t think too positively” about the current situation, Yoon continued, adding that many analysts in Korea and other countries have warned that as the coronavirus continues to spread globally, Korea may see more cases arriving from outside its borders.

Yoon noted that about 80 to 90 percent of people arriving in Korea from Europe recently are Korean nationals who had been studying or working abroad, as well as their families. Health officials said Korea was also seeing an increasing number of people who pass airport checks but later feel symptoms of the virus and test positive.

Among the most recent infections was a senior flight attendant for Asiana Airlines, Korea’s second-largest air carrier, who returned from a trip to New York City. It was the third known time that a Korean flight attendant contracted the disease after two Korean Air flight attendants tested positive earlier this month and late last month.

According to Asiana, the male flight attendant boarded Flight OZ222 from Incheon International Airport to John F. Kennedy International Airport in New York on the morning of March 17. He remained in New York until he boarded Flight OZ221 last Thursday afternoon to arrive back in Incheon Friday afternoon. He took an airport shuttle bus to get to his car, parked outside the Asiana headquarters in Gangseo District, western Seoul, and drove home.

The company said he drove to Samcheok, Gangwon, last Saturday and felt cold symptoms on Sunday. He visited a virus-testing center in Incheon, where he tested positive that night. Twelve flight attendants who worked on the same planes last week have all been told to stay at home for self-quarantine. How he contracted the disease is unknown, a spokesperson for the company explained.

On Tuesday, at least 12 people at a hospital for the elderly in Daegu, seven of whom were patients, tested positive as Daegu officials went down a list of some 390 places with dense populations of senior citizens in the city, where infections clusters were likely. Daegu officials said they’ve also begun testing some 914 workers in the city’s mental hospitals from Monday to check whether any infections have gone unnoticed and plan to finish testing by today.

As more local governments in Korea roll out plans to help low-income constituents with financial subsidies to cope with the outbreak, the Ulju County Office of Ulsan and the Gyeonggi Provincial Government Office recently announced they would offer cash to all citizens in their areas regardless of their incomes. Ulju’s county chief Lee Seon-ho said Monday in a press conference that his office has decided to offer 100,000 won ($80) to every resident to help revive the local economy. Ulju is home to some 222,000 people, and the office said it was planning to offer the money through either cash or debit cards around May, mainly by cutting budgets of other projects.

Gyeonggi said Tuesday that it, too, would give away 100,000 won to all residents in the form of the province’s “local currency,” which can mostly be used in traditional markets and small businesses. Gyeonggi has around 13 million people. The office said it plans to hand out the subsidies next month.

Seoul, the city of Jeonju in North Jeolla and the province of Gangwon have previously said they would offer subsidies between 300,000 won and some 500,000 won to their constituents as well but said the aid would go to the low-income bracket, as opposed to the universal handouts in Gyeonggi and Ulju County.