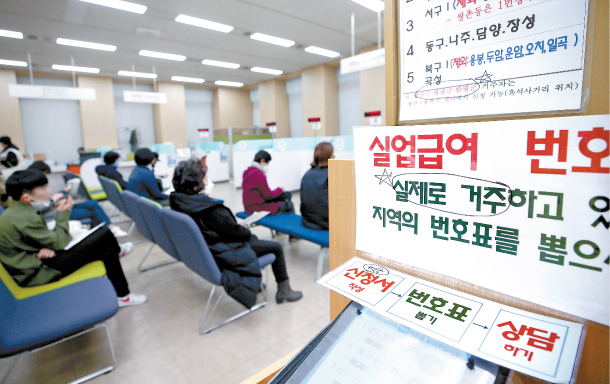 Jobless people wait in front of the counters of an employment service agency in Buk District of Gwangju last week to apply for unemployment benefits. [YONHAP]

And the worst could be yet to come, as the country’s unemployment insurance fund is already beginning to dry up.

About 30,000 Koreans have applied for unemployment benefits this month as of March 19, according to statistics from the Ministry of Labor and Employment and estimates from regional employment service agencies. That’s already an increase of 32.6 percent compared with the entire month of March 2019.

In some regions, the number of applicants for unemployment benefits has nearly doubled, compared with March 2019. Predictably, regions that heavily depend on tourism were hit the hardest. 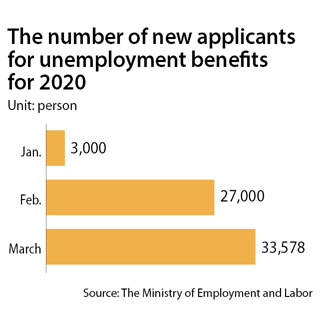 Jeju saw the number of new applicants for unemployment benefits increase by 91 percent compared to the same period last year, and Gangwon’s rose by 82 percent. Busan and Gyeonggi followed afterwards, each increasing by 45 percent and 40 percent, respectively.

In the country’s capital Seoul, the number of people seeking jobless benefits grew by 34 percent.

The country’s epicenter of coronavirus cases, Daegu, saw a rapid surge in the jobless population. After the Daegu government lifted its lockdown orders last week, allowing people to finally leave their houses, applications for unemployment benefits increased by 46 percent in one week.

Some regions, however, saw a relatively small or even negative change. The jobless population in Ulsan decreased by 4 percent than the previous year, and South Gyeongsang, where many confirmed cases were reported, increased by 18 percent on year.

However, experts believe this to be a consequence of last year’s statistics, as both regions went through a massive restructuring last year to overcome a slump in the shipping and manufacturing industries.

The worst is likely yet to come, according to experts, many of whom have suggested the possibility of a massive unemployment crisis as the effects of the coronavirus pandemic continue to play out on the economy.

Typically, nationwide increases in recipients of unemployment benefits are usually reflected two to three months later, meaning that the crisis might worsen in the latter half of this year.

As such, scholars stress out that the government needs to come up with countermeasures immediately, in anticipation of a future rise in unemployment.

“In the short run, the government needs to come up with swift support for small businesses and employees,” Korea University law Prof. Park Ji-soon said. “In the long run, it’s crucial for the government to devise policies that can be applied immediately once the virus outbreak settles down.”

The other issue concerning economists is whether the country’s unemployment insurance fund can cover the rising costs.

The reserve ratio of the country’s unemployment insurance fund currently stands at 0.4, far lower than the recommended ratio of 1.5 to 2.

The ratio is calculated by dividing reserve funds by the total wages paid by employers during the last fiscal year.

At the current level, the funds are only expected to be able to cover unemployment costs for three to four months.

The government has allocated 9.52 trillion won ($7.8 billion) for unemployment benefits this year.

Although the budget has been increased by 18 percent, that amount would only cover up to 40 percent surplus in recipients. This means that if the jobless population increases by more than 40 percent, new applicants for unemployment benefits could be rejected.