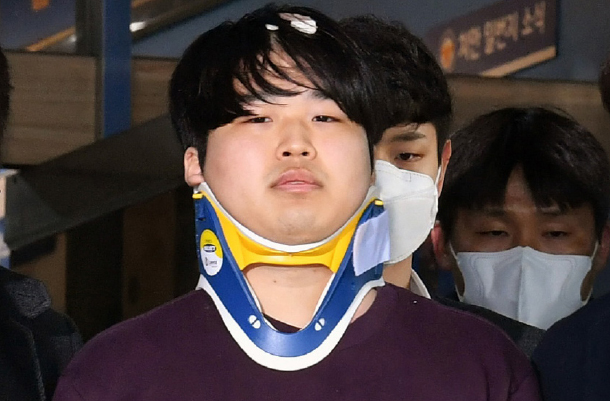 Cho Ju-bin, a suspected leader of a pornography ring that enslaved dozens of women, including children, faces reporters at Jongno Police Precinct in central Seoul on Wednesday. [KANG JUNG-HYUN]

In 1825, American painter and inventor Samuel Finley Breese Morse (1791-1872) was in Washington D.C. when he received a letter from a messenger on a horse from his home in New Haven. It said that his wife was very ill, so he headed home right away. But his wife had died two days before the letter arrived.

The funeral ended seven days before he arrived. He thought about how a message could be delivered faster and invented the Morse telegraph. In 1844, the world’s first telegraph line was built between Washington D.C. and Baltimore. The first-ever message he sent from Washington to his partner Alfred Vail in Baltimore was “What Hath God Wrought.”

Sending a message through telegraph is called “telegram.” While it continued to be used after the invention of phone, the service ended in February, 2006. Seven years later in August 2013, telegram resurfaced in the world, as an internet messenger service with the same name. It was developed by brothers 40-year-old Nikolai Durov and 36-year-old Pavel, who also created Russian social media VK.

Telegram advocates itself as an ad-free open-source free messenger service. It discloses its application source code but guarantees security. In February 2014, messenger WhatsApp had a three-hour interruption. During that time, Telegram users increased by 5 million and it became a global service.

In September 2014, then-president Park Geun-hye ordered in a cabinet meeting a strong response to the distribution of false facts online. Many Kakao Talk users moved to Telegram. It is a so-called cyber asylum. The trend accelerated as prosecutors looked into Kakao Talk for investigations. People believed that Telegram has stronger security as the server is located abroad.

For that reason, Telegram is often mentioned for politically-explosive cases, including South Chungcheong Gov. Ahn Hee-jung’s scandal. It is once again at the center of controversy in 2020 for the digital sex crime “Telegram Nth Room.” I am infuriated by the horrendous crime. More than 2.2 million people signed the Blue House online petition to release the suspected main offender Cho Ju-bin and have him stand in the photo line. The author of this “Fountain” is one of them.