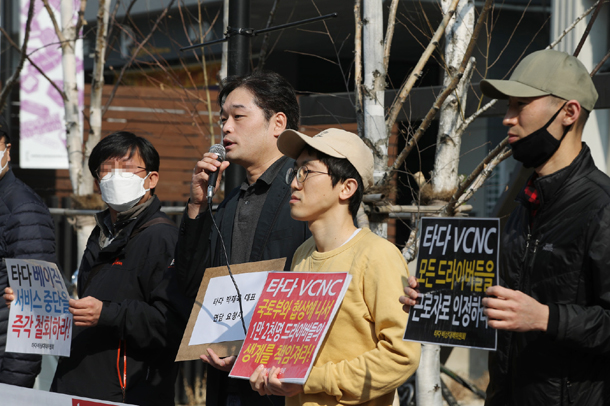 Members of the emergency committee of Tada drivers request a meeting with the corporate heads of the service’s operator VCNC and its parent company Socar in front of their office in Seongsu, eastern Seoul, on Wednesday. [YONHAP]

Faced with disappearing jobs after the government made Tada’s business model illegal, drivers for the van-hailing service Tada are calling on the start-up’s executives to engage them in talks and “take responsibility” for their evaporating workforce.

Tada drivers formed a committee last week to protest the service’s reductions in drivers and vans. A revision to Korea’s private transportation laws - which closed a legal loophole that had allowed Tada to operate while ride-hailing services were largely illegal - passed the National Assembly earlier this month. Immediately after the passage, Tada announced it would halt its van-hailing business within a month.

The drivers’ committee, with more than 240 drivers registered as members, on Wednesday sent representatives to Tada’s operator VCNC and parent company Socar’s office in Seongsu, eastern Seoul. Their request to meet two corporate heads of the companies was turned down by a Socar employee who said the building was vacant due to the coronavirus. They left an official letter requesting for a meet-up.

“Tada’s slogan was ‘innovation,’ and it was the drivers that made that quality service possible. And yet the company has never attempted to explain the situation to us, nothing except one mobile message saying they’re closing down the service,” said Gu Gyo-hyeon, a Tada driver and an official at the Riders’ Union. “We need an explanation; that’s the least responsibility they can take, whether they ultimately do halt the service or not.”

The start-up has been selling off vans and merging regional offices from which the van-hailing service was operated, the committee said. The number of orders per driver has sharply declined.

The Tada driver committee’s head Kim Tae-hwan said he believes the company should have been a little more cooperative with the Transport Ministry.

He added that Tada’s top executives “said they would take responsibility for 12,000 drivers. That’s exactly what I want to see from them.”