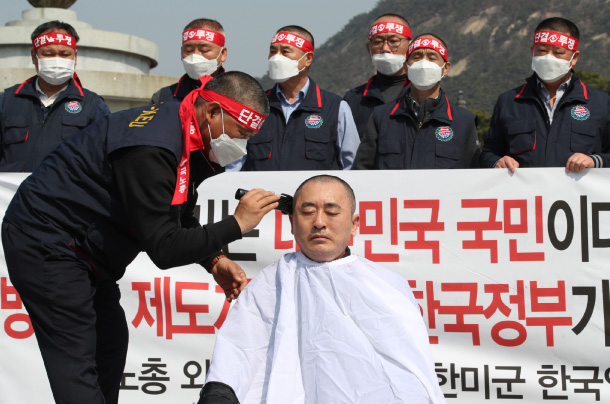 Choi Eung-sik, head of the labor union of South Korean employees for the U.S. Forces Korea (USFK), has his head shaved during a protest in front of the Blue House in central Seoul on Wednesday, calling for the revision of rules on the defense cost-sharing talks between the two countries. The USFK began notifying 5,000 Korean employees Wednesday that they would be furloughed starting next month, officials said, as defense cost-sharing talks between the two countries remain stalled. The two sides have been negotiating a new Special Measures Agreement that stipulates how much Seoul should pay for the upkeep of the 28,500-strong USFK. Salaries of about 9,000 Korean employees are also funded under the agreement. The latest round of negotiations took place last week, but the two sides failed to bridge differences. The USFK has warned of furloughs starting April 1 unless a new cost-sharing deal is reached in time. During the defense cost talks, South Korea proposed concluding a separate agreement to first address the wage issue, but the United States rejected the idea over concerns that such a move could further delay a comprehensive deal, according to Seoul’s top negotiator Jeong Eun-bo. [YONHAP]