Seoul to airlift hundreds of nationals from Peru, Italy

Seoul to airlift hundreds of nationals from Peru, Italy 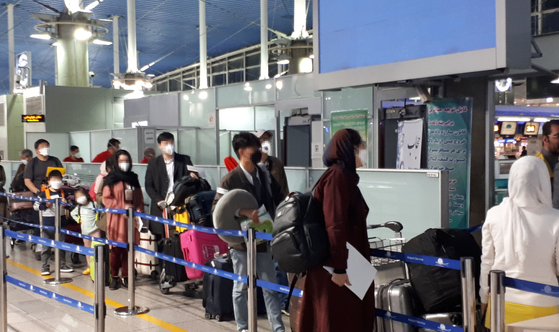 The Korean government is working to evacuate hundreds of stranded nationals from Peru Thursday and Italy early next week amid the global coronavirus pandemic.

A group of 202 Koreans who have been locked down in Peru are expected to be evacuated on an Air Mexico chartered plane from the capital of Lima Thursday, with a layover in Mexico City, and arrive at Incheon International Airport Saturday, according to a Foreign Ministry official in Seoul Wednesday.

The group includes 59 Koreans who had been touring the high-altitude southeastern city of Cusco, before Peru shut down its borders, as well as Korea International Cooperation Agency (Koica) volunteers and a few residents. The Koreans, among other international travelers, had been scattered throughout Peru and have had difficulty even getting to Lima because of the nationwide lockdown.

The Korean tourists in Cusco were to be flown into Lima on a domestic flight. Koreans had been scattered in four other regions, and seven chartered buses were arranged to bring the other travelers to the capital ahead of the flight scheduled for Thursday, said the official. Passengers are expected to pay around 3.5 million won ($2,800) for the flight from Lima to Incheon. They are also expected to pay for the cost of transportation to Lima, around 500,000 won to get from Cusco to the capital.

The Korean government is arranging two chartered flights to Italy, the European country hardest struck by the virus, next Tuesday and Wednesday to evacuate some 600 Koreans amid the worsening coronavirus situation in Europe.

There were 430 Koreans wishing to return home from Milan, and 151 in Rome, according to the Foreign Ministry official as of Wednesday. The schedule will depend on final negotiations with the Italian government amid a nationwide lockdown.

The passengers are expected to pay 2 million won each for airfare.

Diplomats are also working to arrange for a group of 49 Korean tourists and Koica volunteers stranded in Bolivia to fly on a U.S. chartered flight to the United States.

The Foreign Ministry official said that the government currently isn’t arranging any other chartered flight but that it is “continuing to monitor the situation.”

This official said that sending government chartered flights “requires a comprehensive review” weighing the level of danger remaining in the country, if there are no other means of leaving the country through commercial flights and also if there are sufficient numbers.

Korean Foreign Minister Kang Kyung-wha on Wednesday held a video conference with heads of missions in North America Wednesday ordering them to work toward protecting overseas residents, students studying abroad and Korean companies through close cooperation with the federal and state governments.