Telegram trafficker admits no crimes but calls himself a ‘devil’

Telegram trafficker admits no crimes but calls himself a ‘devil’ 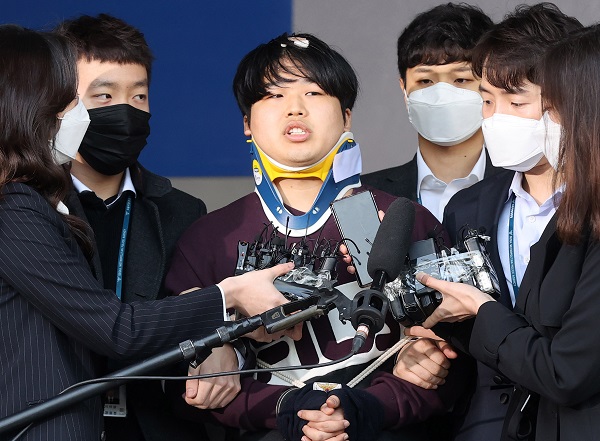 Cho Ju-bin, a suspected leader of a pornography ring that enslaved dozens of women, including children, faces reporters at Jongno Police Precinct in central Seoul on Wednesday. [YONHAP]

The 25-year old suspected leader of a pornography ring that enslaved dozens of women, including children, faced the media at a Seoul police station Wednesday and said, “Thank you for stopping my unstoppable life as a devil.”

Before handing him over to the prosecution around 8 a.m. Wednesday, officers from the Jongno Police precinct in central Seoul allowed Cho Ju-bin to answer questions from the media.

Cho was arrested March 16 after a seven-month investigation into a series of chatrooms operated on the Telegram instant messaging app that offered videos of trafficked women and girls having sex and being raped.

His name in the chatrooms was Baksa, meaning doctor or guru in Korean.

Cho is accused of sex trafficking at least 74 victims, including 16 children and teens, producing illegal pornographic materials and distributing them for profit through the Telegram app from December 2018 through March.

A bandage was visible on Cho’s head Wednesday. Police said he tried to injure himself by hitting his head on a wall when he was in a restroom.

He was also wearing a neck brace. It was not clear if it was being used to treat an injury or whether the police wanted the suspect’s face to be fully visible to the media. While the police and reporters wore face masks to avoid new coronavirus infections, Cho was not wearing one.

“I sincerely offer apologies to President Sohn Suk-hee [of JTBC], [former Gwangju] Mayor Yoon Jang-hyeon and [former] reporter Kim Woong,” Cho said, when reporters asked if he had anything to say to his victims. It was not clear why Cho mentioned them.

“Thank you for stopping my unstoppable life as a devil,” he added.

He did not offer any apology to his victims. Cho also remained tightlipped when asked if he committed crimes or regretting them. His face showed no emotion as he faced the cameras.

The Seoul Metropolitan Police Agency made the rare decision on Tuesday to disclose Cho’s full name, age and release his picture. About 100 reporters and photojournalists came to the Jongno Police precinct. Crowds also gathered outside the station.

“It seems that he wants to shift his guilty conscience to Sohn and others,” said Professor Lee Soo-jung of Kyonggi University, a renowned forensic psychologist and one of the country’s top criminal profilers. “He may also suffer from megalomania.”

“But he must apologize to the victims,” Lee added.