BOK to supply 'unlimited' liquidity for next 3 months

BOK to supply 'unlimited' liquidity for next 3 months 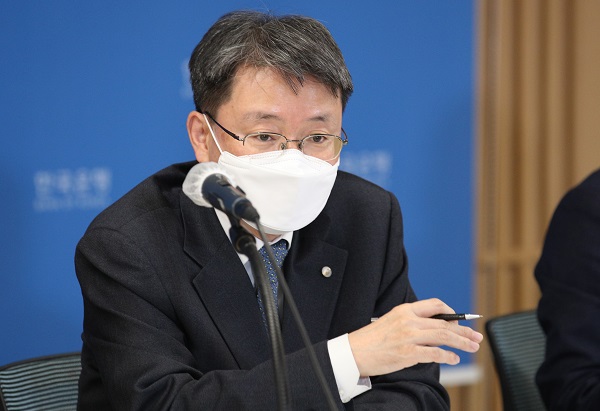 Yoon Myun-shik, deputy governor of the Bank of Korea, announces during a Thursday press briefing that the Bank of Korea will supply an "unlimited" amount of liquidity over the next three months to financial institutions to help prevent a credit crunch caused by the coronavirus pandemic. [YONHAP]

The Bank of Korea (BOK) said Thursday that it will supply an "unlimited" amount of liquidity over the next three months to financial institutions to help prevent a credit crunch caused by the coronavirus pandemic.

"The Bank of Korea decided to provide an unlimited amount of liquidity to financial firms to help minimize the economic fallout from the spread of Covid-19 and remove uncertainties in the financial market," the central bank said in a press release.

To this end, the BOK will regularly purchase local bonds in repo operations every Tuesday through the end of June.

"It is hard to estimate how much liquidity will actually be supplied. But the plan is to supply the entire amount requested and without a limit," BOK Deputy Gov. Yoon Myun-shik said in a press briefing.

The unprecedented move, viewed as unlimited quantitative easing, is partly aimed at funding the government's massive support package, he noted.

"Our economy is facing a serious impact from a global shock caused by the pandemic of Covid-19, but we believe our market stabilization steps, including those announced today, will contribute to the stabilization of the financial market and supplying liquidity for government support programs," Yoon said.

The measure was a first for the central bank, which declined to enact similar policies even in the financial crises in 1997 and 2008.
Korea earlier announced a 50 trillion won ($40.8 billion) support program for local businesses and financial markets that included market stabilization funds for both stock and bond markets.

The government on Wednesday doubled its support package to 100 trillion won amid continued jitters in the local financial markets.

The benchmark Kospi has plunged nearly 25 percent since Jan. 20, when the country reported its first confirmed case of the disease.

The local currency has also dropped more than 6 percent against the U.S. dollar over that period.

The BOK earlier slashed its growth outlook for Asia's fourth-largest economy to 2.1 percent from its earlier estimate of 2.3 percent, and said another downward revision may be inevitable.

Many believe the local economy may even shrink this year.

The BOK has slashed its policy rate to a new record low of 0.75 percent, in its first emergency rate cut in more than a decade.

The central bank may deliver yet another rate reduction to help spur spending and boost economic growth.

The bank's next rate-setting meeting is slated for April 9.