Cho Yong-byoung has been reappointed as chairman of Shinhan Financial Group despite the company’s largest shareholder voting “no” and a major international proxy service recommending other shareholders do the same.

His new term will last until March 2023. 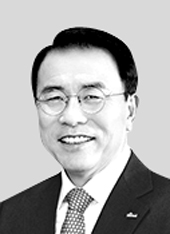 Cho was sentenced to prison earlier this year in an influence peddling scandal, though that sentence was suspended. The heavy sale of now-frozen funds from Lime Asset Management by Shinhan has also raised questions about his judgment and leadership.

The National Pension Service (NPS), a 9.76 percent owner of Shinhan Financial Group, said last week it would oppose Cho’s reappointment, claiming he undermines the company’s value. It also said the reappointment would infringe on shareholder rights and interests.

Despite the votes against his reappointment, Cho won at the annual meeting Thursday. The exact breakdown of the vote was not disclosed.

“I let down customers who had trust in Shinhan and put their precious assets with us,” Cho said at the shareholder meeting held at the headquarters in Jung District in central Seoul. “The group will do its best to minimize losses and resolve the crisis.”

Shinhan Investment CEO Kim Byung-cheol stepped down last week. He took full responsibility for the Lime scandal, in which the group sold 380.9 billion won ($310.6 million) worth of the Lime funds as of November.

In 2019, Shinhan Financial posted a record net profit of 3.4 trillion won and remained the largest financial firm in the country by profit and assets.

Last year, Shinhan Financial completed its takeover of Orange Life, formerly known as ING Life, in an effort to broaden its profit base as interest income remains under threat.

Cho said the company will focus on recovering the trust of its customers in 2020.

“I will consider the latest investment crisis as an opportunity to look back on ourselves, and Shinhan will intimately monitor if the customers are experiencing losses that we are not aware of,” Cho said.

He said Shinhan will also focus on implementing digital technology to create a “whole new financial platform and business models.”