Decision on 2020 Games to be based on quality not speed: Bach

Decision on 2020 Games to be based on quality not speed: Bach

Following the announcement of the postponement of the 2020 Tokyo Olympics due to the coronavirus pandemic, International Olympic Committee (IOC) President Thomas Bach announced the creation of a task force to decide the next step for the Games.

“The agreement is that we want to organize these Olympic Games at the latest in summer 2021,” Bach said during a media teleconference Wednesday. “That means that the task force can consider the broader picture, and this is not restricted just to the summer months. All the options are on the table before or during the summer of 2021.” 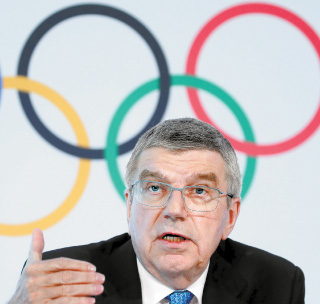 After monitoring the situation of the coronavirus outbreak “day by day, 24 hours a day,” Japanese Prime Minister Shinzo Abe and Bach revealed their decision to postpone the 2020 Tokyo Olympics on Tuesday. The decision followed an announcement by the IOC last week that it was fully committed to the 2020 Games.

“Because we could not manage such a postponement without the Organizing Committee, and without the full support of Japan, I called President Mori from the Organizing Committee before this executive board meeting,” Bach said. “He had contacted Prime Minister Abe. He heard our commitment that a cancelation would not be one of those scenarios to be considered. We then had an executive board meeting on Sunday afternoon, which resulted in opening up the door to study postponement.”

As travel restrictions continue to be imposed every day, as well as the number of coronavirus cases around the world, Bach said he contacted the Organizing Committee once again to talk about the postponement of the Games.

“During this call, Prime Minister Abe, in his introductory remarks, suggested the IOC should decide to postpone the Games,” Bach said.

This is the first time in the Olympics’ 124-year history that the games have been postponed, meaning it will likely take some time before a new start date is announced.

“Following the agreement with Prime Minister Abe yesterday, we have asked our Coordination Commission, together with the Organizing Committee, to study it in detail,” Bach said. “As a first step, we have to see what the options are. We also have to take into account the sports calendar around the Olympic Games and many, many other issues. I think we should come to a solution as soon as possible, but the first priority should be the quality of this decision and the ability to take the input of all the stakeholders into account: the National Olympic Committees, the athletes, the partners.”

Bach said the initial announcement the IOC reached was made considering the athletes’ opinions, and after hundreds of phone calls with the Athletes’ Commission, athlete representatives around the world, as well as phone conferences with all the National Olympic Committees (NOCs) and all the International Federations (IF).

“At the end of these conferences, we had a one-by-one vote from each NOC and each IF on whether they agreed with the strategy proposed by the IOC Executive Board,” Bach said. “In this vote, we had unanimous support, including from the Canadian Olympic Committee.”

“The questions revolved around the qualification system, the training conditions, mental health and other questions. We took all of this into consideration and the many voices of athletes that we heard from around the world who were not in this call. Some were critical, and others were very supportive. But this is normal in this very difficult situation of uncertainty.”

Bach reveled that sponsorship deals for the 2020 Games which were set to expire at the end of the year won’t pose too much of an issue as those involved have pledged their full support. But a big problem does lie with the Olympic Village.

“We have contacted all the sponsors,” Bach said. “We have their full support for this decision, and we will now work to implement it. This is one of many thousands of questions that the task force will have to address. We hoped and we will do whatever we can so there is an Olympic Village because the Village is where the heart of the Games is usually beating. I guess these postponed Olympic Games will need sacrifices, will need compromises by all the stakeholders.”

The postponement will keep the IOC busier than ever over the next two years or so, as the Winter Olympic Games and the Youth Olympic Games will both be hosted in 2022.

“We have a huge challenge now because we have to put the full focus on the organization of Tokyo 2020,” Bach said. “At the same time, the Olympic Winter Games Beijing 2022 and the Youth Olympic Games Dakar 2022 are approaching. As the task force makes progress, we will have a clearer picture of the full scoop of the challenge. Then I am sure we will have to take more measures that concern our internal organization. This is also up to our director-general and his team.”