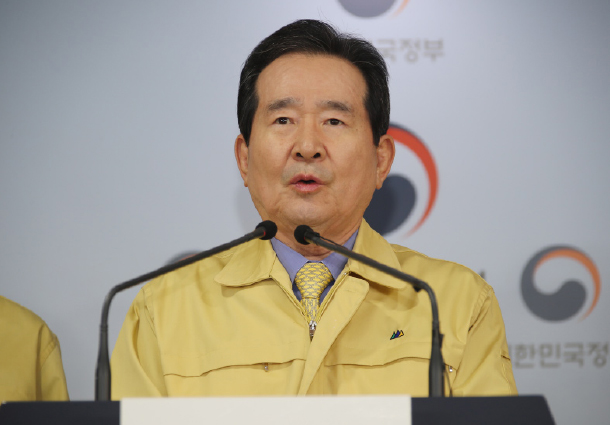 Prime Minister Chung Sye-kyun delivers a speech about the need for “social distancing” to fight the Covid-19 Saturday. He and other ministers of the government declared they will return 30 percent of their salaries over the next four months. [YONHAP]

HAN AE-RAN
The author is the head of the financial team of the JoongAng Ilbo.

I heard a story from a former corporate executive about 20 years ago. The chairman was a good person and did not like employees working late. He ordered that the employees go home early. So the department heads in the headquarters allowed the employees to go on time. But in reality, many of them turned the light off and pretended to go home, then came back to the office and worked late.

The chairman also thought that the employees should be paid enough to make a living. Once, the chairman called employees for interviews to ask how much they were paid and whether they could make ends meet. The head of the general affairs team ordered the employees to tell the chairman a fake amount.

The chairman in the story is Chung Mong-keun, honorary chairman of the Hyundai Department Store Group. I was reminded of the old story because of news about Hyundai Department Store. Chung’s eldest son and current chairman Chung Ji-sun proposed to provide 1 million won ($815) to each of the 3,000 contractors in the department stores with plummeting sales. It is an example of a good management practice supporting not just the employees and executives but also the contractors as the retailers are struggling due to the Covid-19 outbreak.

As everyone is pleading hardship in their struggles due to the Covid-19 outbreak, good management practices and policies for co-prosperity and sharing are announced. The government recently announced that its ministers and deputy ministers are getting a 30 percent cut on their salaries to share the pain. After high-level officials, including President Moon Jae-in, took the initiative, local government heads and public corporation executives joined in.

But I am skeptical. Is it a good policy to take away what was given rather than giving something extra? What do people gain from ministers and vice ministers getting paid less? Do people get comfort from thinking that the elites would understand the struggle of the working class a bit? It is the government that will eventually gain from the policy. It would get the image of the good king in the Joseon Dynasty, who ordered simpler meals during the famine.

How about high-level officials practicing sharing through voluntary donations rather than getting paid less uniformly? We need a tangible good policy.