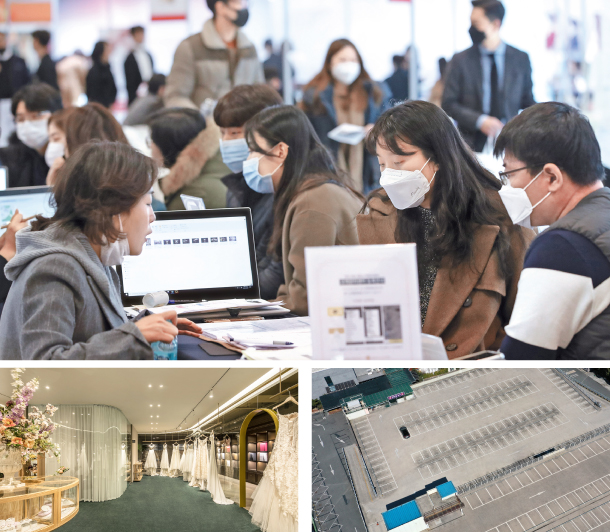 Top: Couples wearing masks consult with planners at a wedding convention held early last month in Bexco, Haeundae District of Busan. Above left: A wedding gown shop sits empty. Above right: The parking lot of a wedding hall in Daegu is completely vacant in late February after couples canceled wedding ceremonies to prevent the spread of the coronavirus. [SONG BONG-GEUN, WEDDING BOOK, YONHAP]

Few sectors of the economy have been spared from the damage of the coronavirus pandemic, with the marriage industry becoming yet another victim of the shutdown of most travel and social gatherings.

Couples who have spent months planning what would be the biggest day of their lives have been forced to decide between canceling or postponing their weddings.

Yoon Myoung-hae, 28, has been luckier than some. This April she expected to tie the knot with her fiance. The couple booked a wedding hall in Myeong-dong, central Seoul, and bought plane tickets to Cebu, in the Philippines, for their honeymoon.

But as the number of confirmed cases in Korea skyrocketed last month, she was forced to postpone their plans until October. Fortunately the wedding hall waived her reservation fees, although her flight was canceled.

For many couples, the biggest financial pill to swallow is canceling the honeymoon.

Some were forced to pay massive cancellation fees or surrender their deposits, while others haven’t even decided on their destinations, as the course of the outbreak and resultant travel restrictions are in constant flux around the world.

Companies have started to change parts of their employee benefits, as more couples cancel their honeymoon but go forward with the wedding ceremony.

Some businesses changed their vacation policies so that newlywed couples can take their leave any time this year, rather than within 30 days after the wedding ceremony.

Some couples have opted to go forward with their ceremonies, but on a substantially smaller scale.

Kim Ji-hyeon, 32, had planned on canceling her wedding scheduled for the end of April but backpedaled her decision. She faced a cancellation fee, based on the number of guests, and said there were no spots left in September and October.

She decided to reduce the number of guests to 140 people and sent out the invitations through the Kakao messenger app rather than meet each guest in person.

“I don’t think it’s right for me to ask people to come to my wedding in person,” Kim said. “It unexpectedly turned into a small wedding, to celebrate with my closest circle of friends.”

Korean couples plan out their weddings with an average of 250 to 300 guests in mind, say wedding planners. Following the coronavirus outbreak, more couples have reduced that number to the 80-100 range.

Industry experts predict the pandemic will accelerate a recent trend toward smaller weddings.

“Even before the outbreak, we’ve seen the preference for small weddings with 10 to 20 guests increase among young couples, and I expect that trend to continue on,“ said Ko Jin-young, the head of Maison de Fleuraucoin, a local wedding planning agency

While some couples managed to avoid the worst, related companies have not, as most are small-sized businesses with not a lot of money to spare.

A manager at a five-star hotel located in Gangnam District, southern Seoul, said only one wedding reservation is left on the books for the months of March and April. The hotel is worried even that one may be canceled at any moment.

Barunson Card, a local wedding invitation maker, is giving a discount to couples who had to reschedule their weddings. Couples can reprint their invitation cards for half the original price.

One famous wedding business, where couples typically have to book reservations at least a year in advance, has only eight weddings planned for those two months, compared to a typical workload of about 24.

The owner of one catering service business said he is afraid to pick up his phone, as most of the calls are from couples asking to cancel their events.

The fear of infection has pushed many weddings back to July and August, typically unpopular months for weddings. One outdoor wedding hall in northern Seoul says there’s barely any slot left between July and October.

“Couples normally reserve their weddings six months in advance. Since spring and autumn are the most popular times of the year, there are some slots left in July and August. I think that’s why we are seeing so many weddings scheduled this summer,” said a wedding planner from Duowed, a local wedding planning agency affiliated with the match-making agency Duoinfo.

One wedding hall in Gangnam has waived cancellation fees for weddings postponed from spring to July and August.

The wedding hall says its lunch slots for the first and second weeks of those two summer months are already fully booked.

Brides and grooms have been venting their frustrations in online forums, sharing stories of the pandemic causing their weddings to fall apart. Some claimed that their postponements have already sparked fights with their in-laws.

And the fallout from canceled weddings has spilled over to related businesses, including wedding gown companies, photo studios and makeup artists.

The owner of one wedding gown shop described this as the worst crisis in her 17 years in the business. She said the number of visitors has halved from the average, with significant losses expected as dresses very quickly fall out of fashion.

A makeup artist who specializes in bridal makeup says she’s been sitting idle in front of an empty vanity for the past month. And making up for those losses by rescheduling in September may not be possible, since her schedule is already fully booked for the fall.