“Kim will oversee the campaign of the UFP,” Park Hyung-joon, a senior official of the party’s election committee, said Thursday morning. 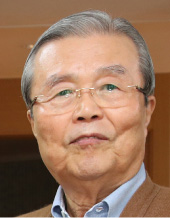 Since February, UFP Chairman Hwang Kyo-ahn has tried to persuade the renowned strategist to lead the conservative party’s campaign. After their negotiations failed, Hwang said last week that he will oversee the campaign as chief. Kim had also announced his decision to stay away from the UFP.

But according to Park, Hwang persuaded Kim to change his mind. Hwang, Park and Shin Se-don, another senior official of the campaign committee, visited Kim at his home Thursday morning to make an appeal, and Kim accepted.

Kim, 79, is an economist and politician who has long promoted “economic democracy” in his career. Kim was the architect of President Park Geun-hye’s victorious campaign in 2012. After his subsequent fallout with Park, Moon Jae-in, then chairman of the main opposition party, recruited Kim to reinvent the liberal party and lead its campaign for the 2016 general elections.

With Kim overseeing the party’s campaign, Hwang is expected to concentrate his efforts on his own race. In Seoul’s Jongno District, Hwang is running against former Prime Minister Lee Nak-yon of the DP.

Earlier in the morning, Hwang defended his decision to override a nomination and award the candidacy in Incheon to a scandal-ridden politician.

“I have worked hard to smoothly operate the nomination process, but it is regretful that there were some flaws,” Hwang said after the party’s election campaign committee meeting. “There was a need to make final changes on some wrong decisions, so I, as the party chairman, did so.”

Hwang said he gave full authority to the nomination committee to select the best candidates for the UFP’s victory, but some selections were wrong and unacceptable to the public.

Hwang was referring to his controversial decision Wednesday night to award the candidacy of Incheon Yeonsu B District to Rep. Min Kyung-wook, a former KBS reporter who served as spokesman of the Park Geun-hye Blue House.

On Feb. 28, the nomination committee disqualified Min, citing a series of insensitive remarks he made that enraged the public during his first term as a lawmaker. Min later challenged the decision to the Supreme Council, winning an opportunity for a primary. On Tuesday, Min won the internal battle against former lawmaker Min Hyun-joo.

The nomination committee, however, disqualified him again Wednesday and nominated Min Hyun-joo, instead. The committee canceled Min Kyung-wook’s primary victory for an election law violation, announcing that the Incheon Election Commission has notified the party that his campaign leaflets contained false information.

The Supreme Council also overruled four additional nominations, and the party will decide the candidates through an internal opinion poll. The disqualified candidates are barred from running independently, the council decided.

“Some participants raised their voices to complain about controversial nominations to the Nomination Committee Chairman Lee Suk-hyeon and Party Chairman Hwang,” said a UFP official. “Hwang didn’t say much. He listened with a serious face and then made the final decisions.”

In a radio interview, Min Hyun-joo said her nomination was taken away because Hwang failed to resist the party leadership composed of hardline loyalists of former President Park. “He is still under their influence,” she said.

Meanwhile, Our Republican Party, led by Rep. Cho Won-jin, announced its list of proportional candidates on Thursday. The conservative party has been promoting a campaign to free former President Park and protest against the Moon Jae-in administration.

According to the party, Choi Hye-rim, the party’s spokeswoman, was given the highest priority. Rep. Suh Chung-won was given the second highest number. Suh, also a longtime confident of Park, is an eighth-term lawmaker representing Hwaseong A District of Gyeonggi. He will run for this ninth term as a proportional lawmaker.

The party said patriotism, identity to support liberal democracy and market economy, professionalism, transparency and active participation for the Taegeukgi (Korean flag) rallies were the major standards for its nominations.

The Taegeukgi Troops earned their nickname as protesters wave the national flag during their pro-Park, anti-Moon events, as opposed to the candlelight rallies against Park.