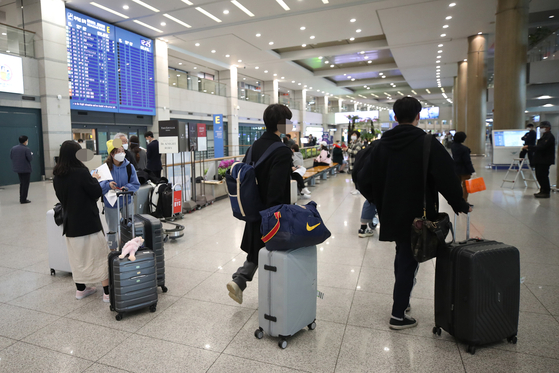 Health officials warned Thursday that foreigners who disobey self-isolation orders and get busted roaming around “without a just reason” will be expelled from Korea.

The Central Disaster and Safety Countermeasures Headquarters, the Korean government’s task force fighting the coronavirus, announced the ultimatum in a press conference Thursday morning as the numbers of coronavirus cases coming into Korea from abroad surge. It said Koreans and non-Koreans who are told to self-quarantine in their homes but refuse to do so will be severely punished.

Since Sunday, the Korean government has made it mandatory for everyone entering the country from Europe — Koreans and non-Koreans alike — to self-isolate in their homes if they intend to stay long term, or longer than 90 days. From Friday, U.S. arrivals will face the same measures.

“If a local government office calls a person and asks where they are, and the person replies they’re at home but are actually outside, that’s a flagrant lie and error, and that person will therefore face punishment,” the official said.

The task force also announced Thursday that all foreigners arriving in Korea are now required to download a self-quarantine app that tracks their location and reports possible symptoms of the virus to local government offices. Those who refuse to download the app will be barred from entering the country, officials said.

The Korea Centers for Disease Control and Prevention (KCDC) said 104 new cases of the coronavirus were detected Wednesday, of which 39 were imported, bringing Korea’s total case load to 9,241. Of Wednesday’s imported cases, 25 were from Europe, 11 from the Americas and three from other Asian countries.

Korea’s death toll now stands at 131, and 4,144 have been declared fully recovered.

About 2,500 people are arriving from Europe and 1,200 from the United States each day recently, local health officials said, more than when Korea was reeling from its own coronavirus outbreak last month. More than 80 percent of arrivals from the two regions are said to be Korean nationals, including students returning from studying abroad or business trips.