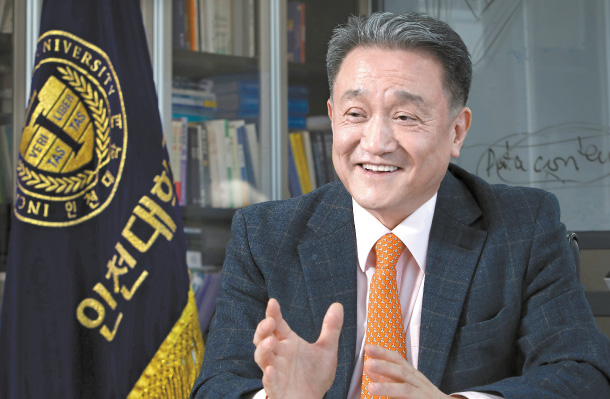 Cho Dong-sung, president of Incheon National University in Songdo, Incheon, elaborates on a new college ranking system he helped establish and which he believes will have great impact on higher education across the world. [PARK SANG-MOON]

INCHEON - In each major university ranking system, Cho Dong-sung sees a pattern. That’s why they all look the same, he said.

“They have a uniform set of criteria for traditional research and teaching,” the president of Incheon National University (INU) said Monday in his office, pointing to a sheet of paper on his desk that compiled the world’s top 10 universities on five major college ranking charts.

“That means they give a disadvantage to universities with special visions and special characteristics, universities who declare they don’t care about what others think and wish to simply follow the light,” he said.

Although it’s important and worthwhile for universities to pursue a single direction, Cho said doing so could ironically come at a price.

“Such universities,” he said, “will never ever be ranked highly.”

With just four months before he retires as INU president, Cho is about to change that.

A university alliance which he’s been leading since July of last year, named the Hanseatic League of Universities (HLU), is preparing to launch a new university ranking system in late May at its third annual conference held in Northern Arizona University of Flagstaff, Arizona.

The rankings, entitled the World’s Universities with Real Impact (WURI), aims to evaluate universities’ “real contributions” to their societies by looking at four key areas: industrial applications, rather than the traditional ways of counting research papers and lecture-style teaching; value-creating start-ups and entrepreneurship, rather than a traditional focus on the number of jobs filled; social responsibility, ethics and integrity, rather than a focus on knowledge and skills just for material success; as well as student mobility and openness for exchange and collaboration between schools and across national borders, rather than an independent but closed system.

The Korea JoongAng Daily sat down with Cho at his office in Songdo, Incheon, this week to hear more about the HLU, the WURI ranking system and, of course, the prospects of the third conference being canceled due to the coronavirus outbreak.

The following are excerpts from the conversation, which were edited for clarity.

Q. So the schedule here says the third annual conference of the HLU will be held in Arizona from May 28 to 30. But with so many events being canceled these days due to the novel coronavirus, will the conference go ahead?

A. About a week ago, I talked with the vice president of Northern Arizona University via email. I guess there was a recommendation by the [U.S.] government to cancel or postpone all conferences and events over the next two months. That’s until May 12. So we have two weeks before our conference begins on May 28. If nothing happens before then, hopefully we can hold this conference. But if the pandemic continues and doesn’t get contained, there’s a good chance - or a bad chance, in this case - we may have to postpone it by a month or so. But there’s also the possibility of holding the conference online. Everything is done online these days, so why not?

Has this online idea been shared with other members of the HLU?

Not yet. If we come to a conclusion we may have to cancel or postpone the conference, then I may propose this idea of an online conference. Or at least we can hold the WURI part online because that part can be handled without any trouble.

Who is invited to the conference?

All institutions of higher education in the world - regardless of government recognition - in which high school graduates can choose to study in preparation for their futures can join the conference. That includes two-year and four-year universities as well as institutions for education and training. Those that participate in the conference are recommended to become HLU members, which is an open platform and requires no participation fees. That also goes toward the WURI ranking. You don’t have to be an HLU member to submit an application to the ranking system, but are strongly recommended to be.

If everything goes well, we’re expecting to see more than 200 - or maybe more than 300 - institutions join the third conference as HLU members this year. The second meeting last year was attended by about 200 people from 70 institutions.

So the WURI ranking system looks at four major points. Does that mean four different rankings will be announced in the next HLU conference?

That’s right. So the first has to do with industrial application for real impact, rather than an ivory tower type of research.

The second one is entrepreneurship and value-creating start-ups rather than focusing on job employment. Nowadays, the creation of start-ups has become more important than employment. If we emphasize employment, that means we’re taking opportunities away from other university graduates. It’s a zero-sum game. But if our students establish a new start-up, then it can create at least three to 10 jobs which other university students can fill. It’s a positive-sum game. Unfortunately, none of the existing ranking systems take into account the contribution of universities toward start-ups. I believe this is absurd.

The third is ethical education and the teaching of social responsibility and integrity. Many university ranking systems favor universities whose graduates receive high salaries, which is why they take into account their average incomes two years after commencement. Due to this criterion, many universities make wrong decisions when developing their curricula. For the WURI ranking, we decided to select a criterion that measures which schools truly improve and contribute to their societies by teaching ethics, social responsibility and integrity to their students. The salaries of their graduates may be lower, but I think that’s what universities ought to be teaching.

The fourth is student mobility and openness for exchange and collaboration between schools. Perhaps due to an imbalance between demand and supply, so-called elite universities keep their doors closed. They don’t offer exchange programs to other universities and they don’t allow other university students to study on their campuses. Perhaps they have a reason, but I don’t think that helps mutual development or the growth of universities.

Each school can apply for any of the four categories and they’re also allowed to submit multiple applications for each category. For each submission, they have to fill out a template explaining their school projects they wish to be evaluated on.

How will the proposals be evaluated in the WURI ranking system?

The presidents of institutes who have submitted applications become the judges in the first “evaluation” step. Then in the second “judgment” stage, representatives of university leagues, higher education-related media outlets and members of the WURI Evaluation Board will review the evaluators’ scores from the first step. In the last “final check” step, the WURI Evaluation Board collects the recommendations of the judges in the second step, checks the reliability of the content in the submitted applications and finalizes the entries in the rankings.

Which of the four rankings did INU apply for?

Two for each, so eight in total.

Can you introduce one to our readers?

One has to do with creating shared value. Instead of solely pursuing our own value, INU strives to pursue the value of the society we belong to as well. Before we implemented this system in 2018, our school used to allocate our financial and human resources to projects we believed would maximize outputs based on three criteria: contribution to research, education and employment. But since 2018, after seeing ourselves as part of the society, we’ve added five more criteria: contribution to globalization; innovation; creating jobs for the society; integrity, such as not being linked to any bribes or corruption; and protection of the natural environment.

So let’s say there are two projects: one only contributes to research and education but adds zero value to the society, while the other project offers less to research and education but contributes more to the overall society. Then there’s a higher chance the second one will get chosen at our school because it creates shared value. I don’t think any other university in the world has this kind of system.