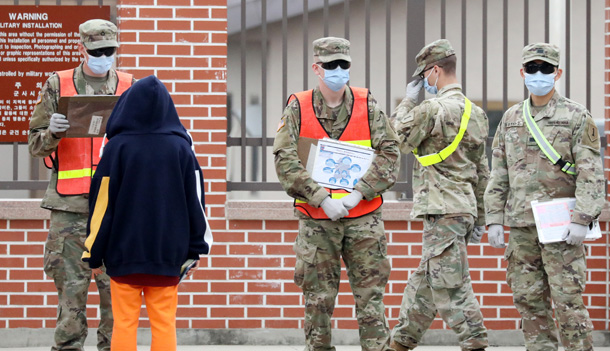 U.S. soldiers wearing masks stand guard at a gate of Camp Humphreys to restrict access to the U.S. base in Pyeongtaek, Gyeonggi, on Thursday after U.S. Forces Korea (USFK) Commander Gen. Robert Abrams declared a public health emergency for all U.S. military personnel in Korea on Wednesday. Abrams noted the increased exposure potential of the virus to USFK installations warranted the measure needed “to enforce compliance and protect the force.” Access to U.S. bases in Korea has been restricted, while service members have been barred from undertaking nonessential travel and activities outside the base. The USFK has so far reported 10 virus cases, with two of them involving Korean workers for the U.S. military in Pyeongtaek. Service members themselves have also been infected, as have some family members, but there have been no fatalities. [NEWS1]