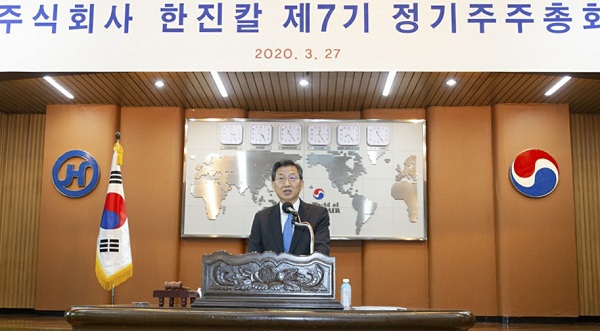 Hanjin KAL CEO Seok Tae-soo presides over the annual general shareholder meeting on Friday at the headquraters of the company. [YONHAP]

Shareholders of Hanjin KAL approved the reappointment of Chairman Cho Won-tae Friday, rejecting a challenge posed by a group of insurgent shareholders.

A total of 56.67 percent of the votes cast were in favor of the reappointment, higher than the required 50 percent, according to Hanjin KAL CEO Seok Tae-soo, who presided over the annual general shareholder meeting held in central Seoul.

A total of 3,619 shareholders voted, representing 84.93 percent of all the shares with voting rights.

The shareholders also elected six new directors recommended by the Hanjin KAL, while turning down six nominees proposed by the group seeking to take control of the board.

Results are not yet available for one other nominee proposed by the group.

The results of the voting are a huge blow to the coalition — Korea Corporate Governance Improvement (KCGI) fund, Cho Hyun-ah and Bando Engineering & Construction.

The meeting was scheduled to start at 9:00 a.m. but was delayed over three hours due primarily to the large number of proxy statements submitted.

The shareholders challenging the chairmen own 42.13 percent of Hanjin KAL, but they only have 28.78 percent of the votes.

Shares bought in 2020 do not count at the 2019 shareholder meeting.

The tide quickly turned against the challengers this month as proxy advisers started backing Cho Won-tae.

The National Pension Service, which holds around 2.9 percent shares, announced on Wednesday that it will support Chairman Cho.

“KCGI will make the best effort to rebuild Hanjin Group as a respected company,” KCGI said in a statement.

Late Wednesday, the fund sold off around 600,000 shares in Hanjin Transportation for 15.1 billion won ($12.5 million), a move analysts say is an attempt to gather together the resources to continue the fight for control of Hanjin KAL.