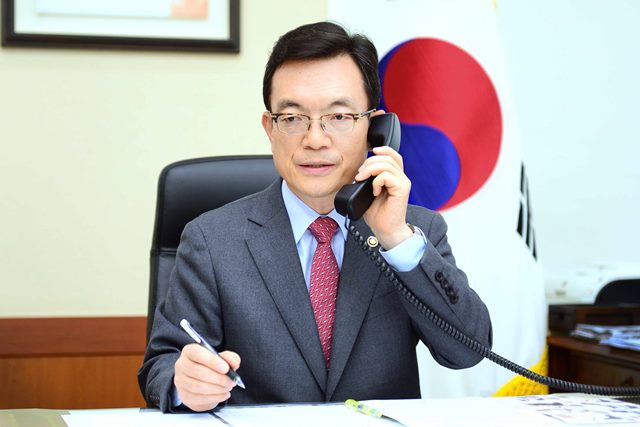 The Korean Foreign Ministry voiced regret Friday over Japan's decision to extend entry restrictions on visitors from South Korea for another month over coronavirus concerns, an official said, calling for the prompt lifting of the measure.

On March 9, Tokyo started asking visitors from Korea to stay at designated facilities for two weeks and suspended a 90-day visa-free entry program for South Koreans. In response, Seoul tightened quarantine procedures on visitors from Japan and halted its own visa-waiver program for Japanese people.

"We express regret that the Japanese government has decided to extend the entry restrictions for another month at a time when there has been evident progress in our quarantine efforts as demonstrated in a recent steady slowdown in new Covid-19 cases," the official said.

"Separate from our regional cooperation in stemming the spread of Covid-19, the government will continue to urge the Japanese government to promptly lift the entry restrictions," the official added.

Tokyo notified Seoul of its plan to extend the entry restrictions through a diplomatic channel on Wednesday evening, the official said.

Asked whether Seoul would take any action in response to Tokyo's move, a senior ministry official said that Seoul would retain the current measures against Japanese, such as the suspension of the visa-waiver program.

"Our measures did not have any particular time limits in the first place," the official told reporters.

"We would take necessary steps depending on how the situation in Japan pans out. But there has been an increasing trend there, and we have been thinking of keeping the current measures rather than readjusting or reconsidering them," he added.

South Korea's prime minister said Friday the government is expected to continue suspending a visa-free entry program for Japanese nationals for the time being, citing the rising number of new coronavirus cases in Tokyo.

On March 9, South Korea halted a visa-waiver program for Japan in a tit-for-tat response to Tokyo's decision to impose new entry restrictions for South Korean visitors over Covid-19.

"Tokyo has recently reported a considerable number of confirmed cases. If the situation continues, there is a high possibility [for South Korea] to maintain its measures against Japan for the time being," Prime Minister Chung Sye-kyun said at a press conference with foreign correspondents in Seoul.

A Foreign Ministry official on Friday called China's banning of the entry of foreigners without prior notice "regrettable," saying South Korea is seeking to minimize the impact of the measure aimed at curbing the spread of the new coronavirus.

The Chinese authorities announced Thursday that they would temporarily suspend the entry of foreigners even with visas or residence permits, starting Saturday, as part of stepped-up efforts to prevent any inflow of Covid-19 from abroad.

The move has escalated public calls for South Korea to respond in kind with its own measures to block all inbound travel from China. Seoul has banned the entry of people only from China's central Hubei province, where the virus first emerged in December.

"There was an abrupt announcement on that measure yesterday, and we think it is regrettable as we were not notified of that in advance," the senior official told reporters on condition of anonymity.