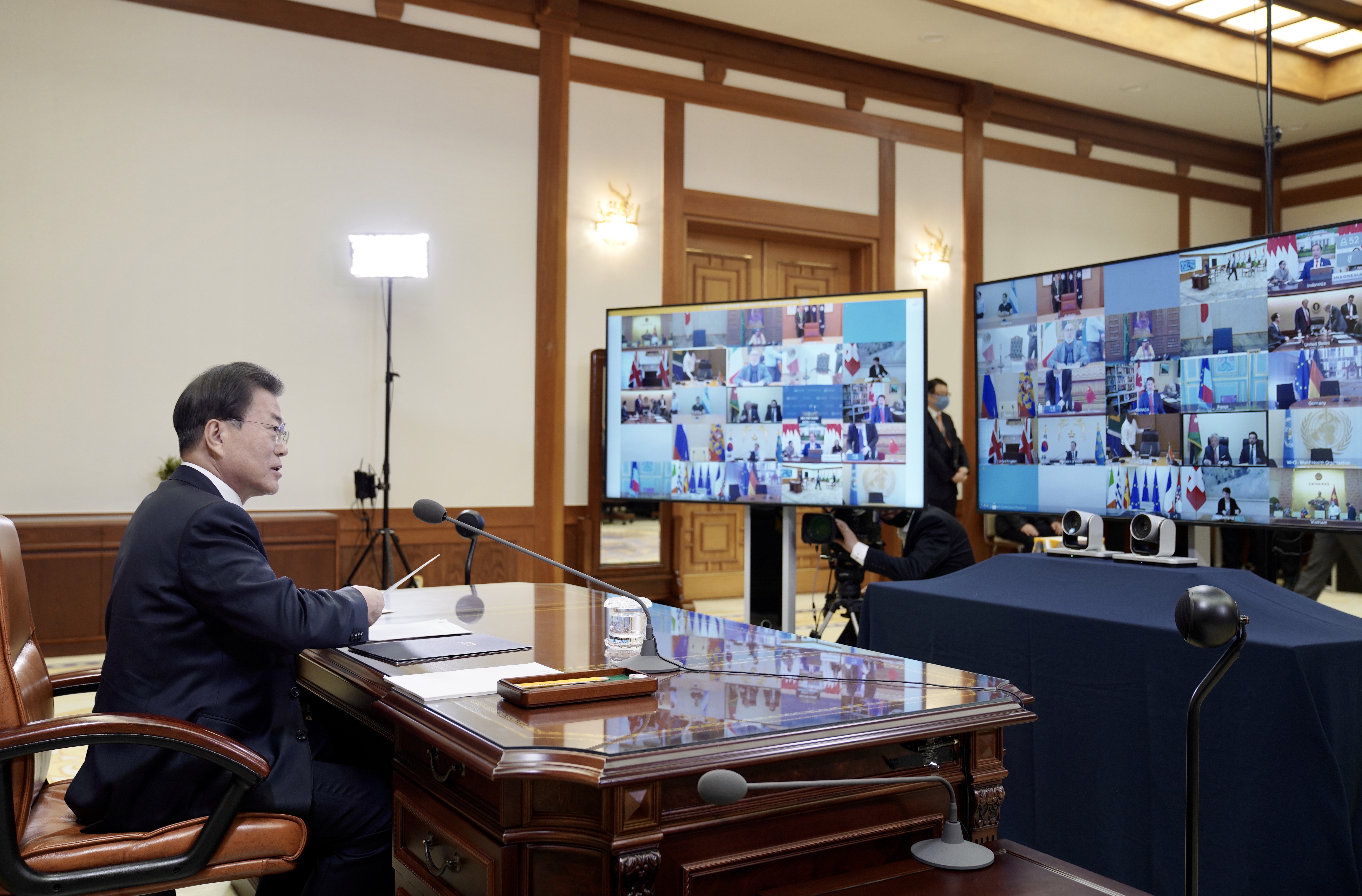 He also called for the member states to adopt "expansionary macroeconomic policies" and strengthen the global financial safety net to cope with the fallout of the pandemic.

He stressed the need to minimize Covid-19's negative repercussions on the world economy. To that end, Moon said, "It is vital that countries maintain the flow of essential economic exchanges."

He added, "to the extent that we do not undermine any one country's efforts at disease control, I propose that we seek ways to allow for the travel of essential persons, such as scientists, medical professionals and business leaders."

He also cited the importance of expansionary monetary and fiscal policies and working together "for the economic stability of the least-developed and impoverished nations."

The president said his country is willing to share its "successful response model" over coronavirus with the international community. South Korea's response model features the three principles of "openness, transparency and democracy."

South Korea is said to have responded effectively to the outbreak, with thorough quarantine measures highlighted by quick and accurate medical testing.

The number of daily additional infections has dropped to around 100, many of which are linked to South Koreans and foreigners arriving from foreign countries.

"Over the last two months, South Korea has been at the center of the Covid-19 challenge," he said during the session that lasted more than two hours. "The time is never right for complacency, yet preemptive and transparent quarantine measures, combined with the public's voluntary and democratic participation in such efforts, are bringing gradual stability."

He cited "timely testing and infection prevention" as shown in the introduction of "drive-through" testing sites, a "self-quarantine" smartphone app and "special entry procedures" at airports.

"We have not imposed a total restriction on inbound travelers from abroad," Moon said. Instead, he added, South Korea has conducted comprehensive tests for travelers from countries with large numbers of infections.

Regarding global efforts to develop a vaccine for Covid-19 and help developing countries enhance their capability to combat epidemics, he made clear, South Korea "will be there every step of the way."

Seven nations, hard hit by the coronavirus, have been invited as observers -- Spain, Singapore, Switzerland, Senegal, Vietnam, the United Arab Emirates and Jordan. The United Nations and the World Health Organization also joined the meeting, along with some other international organizations.

The G-20 summit was launched in 2008 for a joint response to a global financial crisis.