Most arrivals are required to self-quarantine

Most arrivals are required to self-quarantine 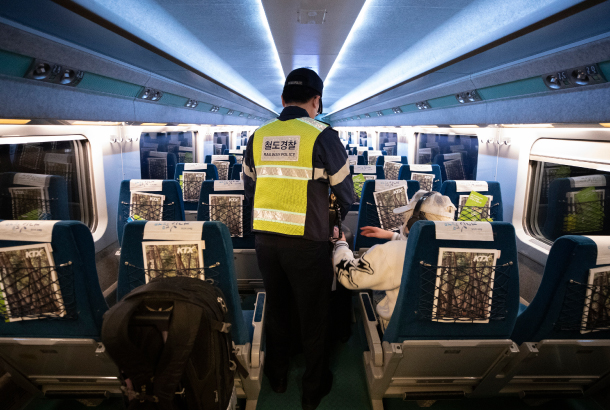 A railway policeman guides a person who flew into Korea from abroad to a seat in a KTX car designated for new arrivals at Gwangmyeong Station in Gyeonggi on Sunday. From April 1, it is mandatory for both Koreans and foreigners who come to Korea from abroad to self-quarantine for two weeks. A few visa categories will be exempt from the isolation order. [YONHAP]

Starting Wednesday, almost everyone entering Korea will be required to self-isolate for two weeks, the incubation period of the new coronavirus.

Limited exceptions are being made for a few specific visa categories.

Prime Minister Chung Sye-kyun said the new measures will be imposed on both Korean and non-Korean nationals landing in the country from anywhere else in the world, regardless of how long they intend to stay.

For those who don’t have accommodations available to them, the prime minister said they will be held in government-run facilities at their own expense. 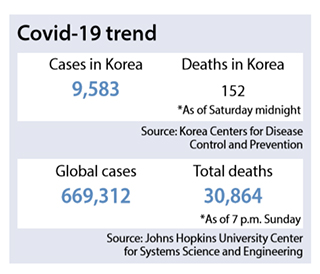 The Korean government “strengthened quarantine measures for arrivals from Europe and the United States, but we need to implement additional measures considering the unprecedentedly steep global infection rate” of the coronavirus, Chung said in a meeting of the Central Disaster and Safety Countermeasures Headquarters, the Korean government’s task force fighting the coronavirus, in central Seoul.

Korea “will expand its mandatory isolation policy to short-term travelers as well in order to effectively block all unnecessary arrivals, such as those for tourism,” Chung went on.

Those who receive permission from a Korean Embassy to visit Korea for business or humanitarian work, or to participate in an academic forum, are also exempt.

The two-week self-quarantine rule used to be applied to people arriving from Europe and the United States for a long stay only - those who plan to remain in Korea for more than 90 days. Short-term travelers from the two regions weren’t placed under quarantine but had to be confirmed virus-free with a test before being allowed to leave the airport.

The heightened restrictions on foreign arrivals came as health officials announced a triple-digit increase in infections both Saturday and Sunday. Most of the new cases were traced to a cluster in Daegu and or to people contracting the disease abroad.

On Saturday, the Korea Centers for Disease Control and Prevention (KCDC) reported 146 new cases Friday, 41 of which were imported, or 28.1 percent. Of those 41 cases, 25 were from Europe, including Britain, Ireland and Spain, while 12 cases were from the Americas, mostly the United States. Four were from Thailand.

On Sunday, the KCDC reported 105 new cases Saturday, 41 of which were brought from a foreign country, or 39 percent. Twenty-three cases were traced to Europe, 14 to the Americas and four to other Asian countries.

The KCDC said some infections were detected at customs while the others passed customs but developed symptoms after leaving the airport.

On Saturday, for the first time in Korea’s monthslong battle against the coronavirus, the number of recovered patients surpassed the number of patients being treated or isolated after testing positive.

Yoon Tae-ho, a member of the Central Disaster and Safety Countermeasures Headquarters and an official in the Ministry of Health and Welfare, during a press briefing credited the government’s “aggressive” virus-testing system, epidemiological investigations and quarantine measures for the milestone.

However, the Korea Medical Association warned the government against hopeful thinking Friday, saying now “isn’t the time” for it to let its guard down and that “every single word” officials utter should be based on discretion and responsibility.

In Daegu, a new cluster was discovered in a psychiatric hospital.

At least 75 infections have been traced to the Second Miju Hospital in Daegu after a patient who’s been hospitalized there first tested positive last Thursday. So far, 74 patients at the hospital and one caregiver have been found to be infected, but Daegu officials believe the figure could rise in light of the fact that several other people are still waiting for results.

Health officials believe that the cluster is connected to an earlier outbreak that occurred at Daesil Nursing Hospital, which is in the same building, because they share an elevator.

The psychiatric hospital occupies the eighth through 11th floors of the 11-story building, while the nursing hospital for the elderly occupies the third through seventh floors.

At least 90 coronavirus infections have been traced to Daesil Nursing Hospital. The first case was discovered on March 20, six days earlier than the first case of the Second Miju Hospital.

The cases at Daesil were discovered as Daegu officials were checking a list of some 390 places in the city with dense populations of senior citizens, where infection clusters were likely. After the cluster emerged at Daesil, the city feared an outbreak might have gone unnoticed at the adjacent Second Miju Hospital and ran a virus test on all 72 workers there on March 21.

Daegu’s plan was to run tests on all 286 patients at Miju if any worker was found to be infected, but none were. The city’s health officials were monitoring the situation when three patients at Miju started exhibiting symptoms of the coronavirus last Wednesday, and one tested positive the next day, a Daegu official explained. After then, the hospital was placed under cohort isolation and all patients were tested.

Cohort isolation refers to the shutting of an entire institution to prevent the spread of a contagious disease.

Daegu announced that 2,226 patients in the city’s 17 psychiatric hospitals would be tested this week for the coronavirus.

In Suwon, Gyeonggi, a British man in his 30s faced a fierce public backlash when the city revealed he disobeyed the government’s self-quarantine rules by roaming around the city and visiting a screen golf course arcade without a face mask on after he was told to self-isolate at his home till his test results came out.

The British patient is currently receiving medical treatment at a hospital in the province.

Suwon’s official website and blog were flooded with criticism of the British patient over the weekend, with some urging he should be deported from Korea.

Suwon Mayor Yeom Tae-young said Friday through his Facebook that the city was planning to take “stern” punitive action against the British national under the Infectious Disease Control and Prevention Act, which could mean he might face a 3 million won ($2,500) fine.