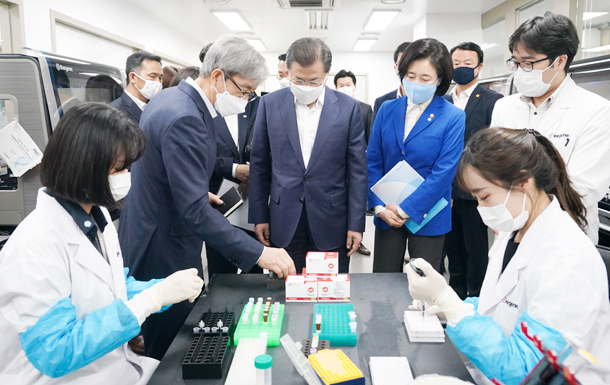 Korea should be proud, and it should take a moment to congratulate itself: The country successfully bent a curve much of the rest of the world is still battling.

Credit is due to the medical professionals, volunteers, the government and of course diagnostic kit manufacturers.

The challenge now is deftly transforming the latest Miracle on the Han River into a more permanent gain - for the country and for the world. In a way, the progress made so far was the easy part. Korea has long been good at rising to a challenge and overcoming adversity.

The country especially needs to avoid getting ahead of itself and stumbling over its own success, which it seems to be in danger of doing.

Over the weekend, the Ministry of Foreign Affairs sent out a press release saying that three Korean companies had passed a regulatory milestone that doesn’t really exist.

“Three products from local Covid-19 diagnostic kit manufacturers obtained preliminary approval, which is a step in earning an emergency use authorization [EUA] from the U.S. Food and Drug Administration [FDA],” the statement said. “From earning this preliminary approval from the FDA, those products can be sold in the U.S. market.”

Within minutes of the Saturday afternoon announcement, the media got busy spreading the news, while investors got down to crunching the numbers and updating models.

The companies themselves were oddly quiet. Not a peep from any of the six Covid-19 diagnostic test makers in the country. No press releases or KakaoTalk messages.

Turns out, the “preliminary approvals” mentioned by the Ministry of Foreign Affairs don’t really exist. And anyhow, some Korean companies are already exporting their test kits to the United States, legally and without an EUA from the FDA.

Earlier this month, the FDA issued a waiver that allows U.S. states to import and use Covid-19 tests kits not yet approved for emergency use by the FDA.

The authority said in a March 16 statement that it “does not intend to object to the distribution of use of these tests” while test kit manufacturers prepare their EUA requests, adding that the preparation of an EUA request normally takes about 15 days.

That made all the difference, for the manufacturers and for the U.S. states.

A number of other Korean test kit makers are also in discussion with the FDA for EUA, meaning that they may qualify to utilize that loophole.

The ministry later clarified its Saturday press release, saying that the three companies received pre-EUA case numbers for their coronavirus diagnostic solutions. According to the FDA, a case number is only a confirmation that the regulator has started a review of the submission. It doesn’t indicate anything about the chances for approval.

For the administration, test kit news is important as the general election is scheduled for April 15. Every Covid-19 related achievement promises to help ruling party candidates. FDA approval, following the call with Trump and in the context of the general success during the outbreak, could mean a lot to Moon.

Moon’s government has already had problems with its test kit messaging.

Earlier this month, the Blue House had to quickly retract an announcement just hours after its release.

It had boasted of the successful export of Covid-19 test kits to the United Arab Emirates following Moon’s conversation with Crown Prince of Abu Dhabi Mohammed bin Zayed Al-Nahyan.

At the very best, it was an exaggeration.

The 51,000 kits from Noble Biosciences were just for collecting samples, not for the analysis of those samples.

“We said we exported test kits, but they were not a complete package,” said Presidential Spokesperson Kang Min-seok in a press briefing. Sample collection kits are used to swab and store specimens collected for transportation to laboratories, and they alone are not capable of diagnosing Covid-19.

Since the outbreak started, local diagnostic kit manufacturers were all in to meet the demand and make themselves known, with press releases, media interviews and regulatory filings. They sold thousands of kits to dozens of countries affected by the virus, and while the pandemic is a grave concern to the world, the crisis was a great opportunity for them.

At times, they have also been reticent, fearful of releasing valuable information and straying outside the regulatory lines. In interviews, they declined to reveal at what stage of EUA review they are in for their test kits.

Given what is known, emergency use approvals are likely.

The United States still needs more test kits, and the conversation between Moon and Trump suggests that the political will exists on both sides of the Pacific to get deals done and get the test kits moving.

Inconsistent and inaccurate announcements at this point don’t help anyone. They cause confusion and they threaten the goodwill that has been built up by Korea and its diagnostic kit makers.

What was accomplished by the country was nothing short of miraculous. There’s no reason to ruin a good thing with imprecise and sloppy information.

It is worth noting that the FDA process is complicated and difficult and is being blamed in part for the slow roll out of test kits in the United States.

Confusing the terminology is easy, especially since the regulator has chosen to add a whole new category to the process. The emergency is so great that the “a wink and a nod” de facto approval now exists before the actual emergency approval.

The government can be forgiven to a certain extent for inventing a new approval.

What is not so easy to see past is enthusiasm eclipsing candor.

Korea’s big win was indeed big. Huge is not an exaggeration. The hard part is parlaying that into something more.

Whatever that may be, it will only happen if the Blue House and ministries stay focused and disciplined, tackling the next step with the professionalism that allowed the country to get where it is today.