When pets become lifelong companions: At 20 years old, Dooly and Shaa have both lived life to the fullest

When pets become lifelong companions: At 20 years old, Dooly and Shaa have both lived life to the fullest 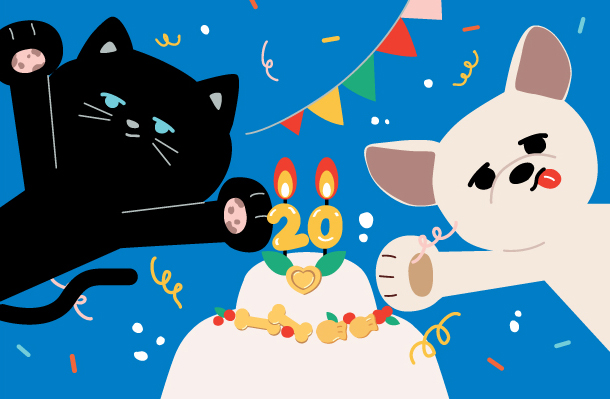 TURNING 20 FOURTH IN A SERIES

We’ve all had our coming-of-age moments growing up, unless you’ve managed to travel through time (in which case we’d love to interview you).
The Korea JoongAng Daily is turning 20 this year. We’ve had our own coming-of-age moments, but rather than boring you with stories about us, we decided to bring you stories of people, animals and organizations “Turning 20.”
Here’s to 20 years and 20 more to come.

What does 20 years represent in a person’s life? It’s more than enough time for everything to change. But in relativity, it’s only a chunk of one’s life in an era where many people live to be 100.

For our furry friends though, 20 years is a full life and a rarity considering the average life span of cats and dogs. Few people are able to spend two decades with their pet companions, but those lucky enough to do so realize how special the experience is.

The Korea JoongAng Daily scoured the country looking for pets born the same year as the newspaper, and two turned up. We were lucky enough to meet 20-year-old dog Dooly, who lives in Busan with his owner Nam Hyun-gyu, and a 20-year-old black cat named Shaa who resides in Seoul with his owner Kim Hye-ren.

The following are edited excerpts from interviews with Dooly’s and Shaa’s owners, conducted on separate occasions.

Q. Can you tell us how you first met Dooly and Shaa?

A. Nam: I first saw Dooly at an animal hospital I was passing by on Dec. 24, 2000. I was 10 years old at the time, and it was love at first sight. I wanted him, and I pestered my mom to get him. My mom liked him too, so that’s how he became a member of our family.

(In Korea, it is possible to buy pets from veterinary clinics.)

Kim: Shaa is a rescue cat. When he was first found, he was a fully-grown male cat only weighing 1.8 kilograms [3.97 pounds], which means that he was practically just skin and bones. He was rescued in the summer of 2001, and he came to that year on December. We presumed that he was born in late 2000.

At the time, there was a website which was run like a web community where cat moms and dads would share stories about their cats. I was already raising two other cats at the time - Zona and Terter. I had once written that I wanted to raise a black cat - completely black from its head to the tip of its tail - like a magnificent black puma. The person who rescued Shaa thought of me when she found him and asked if I could raise him.

What is the secret behind Dooly’s and Shaa’s longevity?

Nam: There’s nothing special. In the 20 years of Dooly’s life, I’ve only taken him to a hospital once - last year - because before that he has never been particularly sick. I have only fed him dog food and maybe some treats from time to time, but we didn’t give him any special supplements for his heath.

But that one time I’ve took him was when he woke up and had bloodshot eyes. I thought that he had crashed into something and was injured. But the vet said that it was a natural thing that happens to old animals - a blood vessel in his eye had burst.

When I look back, I don’t think I took such good care of him. Back in the early 2000s, dogs were thought of as just pets, not as companions. There wasn’t as much content and information about animals back then, and I still regret not taking care of his teeth properly. I have had Dooly since I was 10, and when I became an adult, Dooly was already old. His teeth began to fall out when he was 14 years old. It was already too late to do anything to save his teeth, and the hospitals recommended [not to do anything] because of his age. Right now he can only eat soft foods that I make for him.

Kim: He’s born that way. There’s no answer to this question. Shaa was never seriously sick to the point of needing to take medicine or have surgery. If there is any chronic disease, he’s currently suffering from constipation and he is practically blind. I found out about his eyesight too late. According to the vet, his pupils were ruined because of old age, and they couldn’t control the amount of light that comes into his eyes. So he must have been suffering from the pain for quite some time.

It was the most shocking news that I had heard about Shaa. It’s what I regret most for Shaa, because before then I didn’t pay as much attention as I should have to him, compared to Zona and Terter. Zona started suffering from Graves’ disease in 2010, and Terter had cerebellar hypoplasia, so I would spend all my time and effort taking care of those two. Since Shaa was so healthy, I didn’t realize that his pupils weren’t working even though I saw his face everyday. If I’d found out about it earlier, I could have slowed down the process.

What do the vets say about Dooly’s and Shaa’s health?

Nam: First, the vet was surprised seeing Dooly. But he seems like his age because he does look old - his back is hunched, he’s deaf and he has lost all his teeth. But he’s still in good condition despite of his age.

Kim: Shaa is in good health considering his age. That’s all. Maybe some illness might be discovered if he undergoes a detailed examination, but there’s no point in that anymore. If a young cat is sick, we try to get them better, but for old ones, what matters is that we try to prevent the condition from worsening, so that they can spend the rest of their lives in peace. Since Shaa throws such a fit every time he leaves home, I try to minimize hospital visits as much as possible. As of now, going to a hospital is for emergencies only.

When did you realize that Dooly and Shaa were old? What is the hardest thing about taking care of an old animal?

Nam: I feel it every time we go out for a walk. Dooly has lived almost three times longer than children in kindergarten. So when I see little kids outside, I link their age with Dooly’s age. And also when my childhood friends come to visit me. My friends are all surprised to see him still alive (laughs). They’ve had dogs too, but their dogs have all passed away.

Dooly is still healthy for his age, so there aren’t any hardships or difficulties taking care of him. But since he’s at an age where it won’t be a surprise if he suddenly passes away, I have started to check up on him whenever I get home. If he’s sleeping too soundly, I wake him up to check that he’s still here.

Kim: Shaa began to get sick after Terter died. That’s when he started to have constipation. He didn’t show it, but it’s understandable that he misses her because they were together for 17 years.

I’ve taken care of sick cats before, but out of all three, the most difficult cat to care for is an old cat. I joke about this consistently, but it is really exhausting to look after a grandpa cat (laughs).

No matter how troublesome it was to have three cats around - and mind you, they caused quite a ruckus when they were all together... and I had some tough moments with Zona and Terter when they were sick - but Shaa, an old cat, is the hardest to take care of. As he grew old, he lacked an appetite and stopped eating regular cat food. So now I have to force feed him, little by little, every three to four hours, and when I feed him, he does eat. So I know that he will be starving when I’m not around to feed him, I can’t even go outside for too long without worrying about him.

It’s strange to see so much of my attention focused on this old, sleeping cat, more than it ever was for terminally ill cats like Zona and Terter. I worry even when he’s sleeping because he may never wake up. If he’s sleeping too deeply, I get scared and shake him to wake him up.

What is the happiest memory you have with your animals? Are there any special moments that you two share?

Nam: Dooly likes to be scratched behind his ears. I thought all the dogs liked this, but it turns out to be just Dooly. He’s just there whenever I’m around home. Like if I’m watching television, he comes up and pushes his butt against me, which is his way of asking to pet him. Just small moments like that [is when we’re happiest].

Kim: The moments that I miss the most are when all three cats were together. But the most important thing now is that Shaa is here, alive and healthy next to me. He recognizes me, and that’s what matters.

What do you think about the current health care system for companion animals? After raising Shaa and Dooly for 20 years, what were the advantages and disadvantages of raising a pet in Korea?

Nam: I think we’re going in a positive direction. Back when I first got Dooly, it was considered to be too much or unnecessarily excessive to give pets so much attention. Now, we think of them as our companions.

Kim: It was in the year 2000 when it became normal for cats to be raised indoors. Zona, Terter and Shaa can be called first-generation house cats. Although cat-related content and products are becoming more common, products for old cats are still lacking. For instance, Shaa cannot use the litter boxes that are out in the market now, because all of the litter box thresholds are too high for him to climb into. This is a common problem for all households caring for an old cat. I think we’re somewhere in the middle of the progress. There may be more demand as more and more cats grow older.