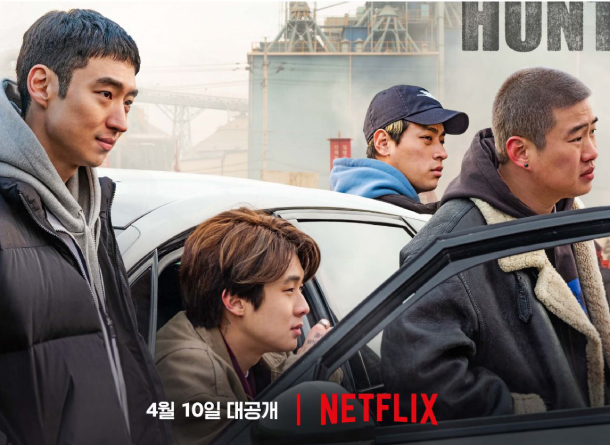 While “Time to Hunt,” top, will premiere on Netflix without a theater release, low-budget local film “Justice High,”. [NETFLIX]

The unprecedented coronavirus pandemic is leading to many firsts in the ways that local films get distributed.

Last week, Netflix announced that director Yoon Sung-hyun’s “Time to Hunt” is heading straight to the streaming service without a theater premiere.

The film was one of the most anticipated blockbusters of the season, featuring stars Lee Je-hoon, Choi Woo-shik, Ahn Jae-hong and Park Jung-min. However, as the outbreak continued to get worse, many upcoming local films decided to delay their releases indefinitely.

With this weekend’s box-office sales falling lower than ever before, the decision by film distribution company Little Big Pictures to move “Time to Hunt” to the streaming platform is understandable. 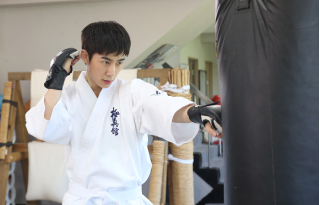 Which debuted on Olleh TV on March 5, is heading to CGV next month. [GNOS]

However, Contents Panda, which was in charge of the film’s overseas distribution, hinted that the decision would lead to a legal battle. The company argues that Little Big Pictures signed the contract with Netflix without properly notifying them.

“Without proper discussion, Little Big Pictures demanded to terminate our contract early this month so that the film could be released exclusively on Netflix,” the statement read. “Although we made it clear that we could not suddenly cancel contracts with countries that we’ve already sold the film’s distribution rights to, the company went on to sign the contract with Netflix without alerting us.”

However, Little Big Pictures responded to the claims by saying that they were “completely false.”

“We had plenty of discussions with Contents Panda beforehand and respectfully followed the legal process to terminate the contract based on the condition that the two parties could end the contract when in the face of a natural disaster,” the company argued. “We signed with Netflix only after properly ending the deal with the former.”

Aside from the legal dispute, when “Time to Hunt” does land on Netflix on April 10, it will be the first Korean film ever to premiere on the streaming platform without a theater release.

“If ‘Time to Hunt’ sets a precedent, then other films might follow suit,” an industry insider commented. “I think the possibility is always open for that. Moreover, the film industry worldwide is being affected by the coronavirus.”

Meanwhile, there is a new precedent that has been set for theaters too.

“Justice High,” an action-comedy film about three high school friends learning karate to fight against school violence, premiered on internet protocol TV service (IPTV) on March 5, but due to the film’s popularity, the film is heading toward the multiplex. The movie will have its theatrical premiere at CGV on April 9.

“Justice High” is the first local film that debuted on Olleh TV’s IPTV service to make its way to local theaters.

Although the popularity of IPTV and other over-the-top (OTT) services such as Netflix, Watcha, Oksusu and others have been surging, it has always been the norm for commercial films to have a theater release before making their way to streaming platforms.

According to the film’s distribution company Gnos, it’s working bringing the film to other multiplexes as well.

“It is a new try for us, but since we are lacking new films to the point of not having enough daily screenings, it’s certainly meaningful to have even small films [like ‘Justice High’] premiere in accordance with the audiences’ needs,” a CGV spokesman said.

Despite movie chains’ attempts to lure in audiences, however, local theaters are still in peril.

Last week, CGV reported that it will be closing 35 of its branches this weekend, accounting for 30 percent of their branches nationwide.

Although CGV has been operating under an emergency management system since some confirmed patients were reported to have visited their branches, the plunge of daily box-office sales has forced the multiplex to introduce more measures to tighten its belt.

“In theory, it would be more appropriate considering our financial situation such as rent, labor and other regular expenses to suspend our business altogether,” the spokesman said. “But as so much of our film industry relies on theaters, we decided to just shut down 35 branches for now.”

Multiplex chains’ profits are directly linked to the revenue of the Korean film industry, and the shutdown of theaters affects all aspects of the local film industry, which accounts for a total of 80,000 jobs.

CGV hinted that it may close all of its branches nationwide if the virus outbreak fails to subside.

Lotte Cinema and Megabox have also been operating under an emergency management system as the virus spreads.

While Lotte Cinema is still withholding its decision to close down branches, Megabox will shut 10 out of the 44 branches that they directly manage in April.

“There may be more branches closing down depending on the situation,” a Megabox spokesman said.