The Korean Central News Agency (KCNA), a regime mouthpiece, said the test — “conducted successfully” — was meant to verify the “tactical and technological specifications” of a super-large multiple rocket launcher that is soon to be delivered to the country’s military. 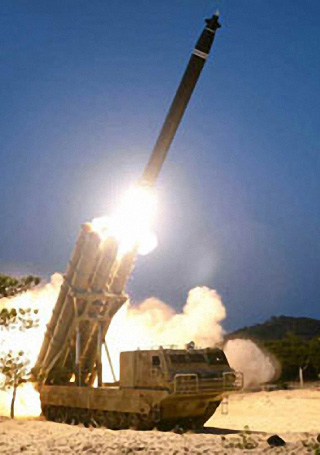 The Korean Central News Agency reported on Monday that a super-large multiple rocket launcher was test-fired on Sunday. [YONHAP]

Unlike the North’s three earlier weapons tests this month, the KCNA did not mention North Korean leader Kim Jong-un as being among the supervising officials. Ri Pyong-chol, a vice chairman of the North’s ruling Workers’ Party, instead guided the launches along with senior officials of the Munitions Ministry and national defense researchers, the report said.

“The operational deployment of the weapon system of super-large multiple rocket launchers is a crucial work of very great significance in realizing a new strategic intention of the Party Central Committee for national defense,” Ri said, according to KCNA.

A photograph of the test released by the KCNA showed a rocket being fired from one of the six launching tubes on a transporter erector launcher (TEL). The weapon appeared most comparable to what the North said was a “large-caliber multiple launch guided rocket system” from its launches in August last year.

The two tests could very well involve the same weapon, given their similarities. The rockets fired on Sunday flew a distance of around 230 kilometers (140 miles) and achieved peak altitudes of around 30 kilometers, according to South Korea’s military, while the launches of two rockets on Aug. 1 last year flew a similar 250 kilometers at a peak altitude of 30 kilometers.

The KCNA’s photographs from earlier tests showed TELs with four launching tubes, meaning the North could have developed both variants for its multiple launch guided rocket system. Military experts in South Korea also noted that the projectile from Sunday’s test had a smaller caliber just over 400 millimeters, when compared to the 600 millimeters of rockets shown earlier.

South Korea’s Joint Chiefs of Staff (JCS) on Sunday said it was analyzing the specifications of the test but it appeared to involve short-range ballistic missiles.

When considering the weapon’s range and specifications, such as the inclusion of a guidance system, Seoul’s military officials say the projectiles fired from the North’s super-large multiple rocket launcher easily classify as ballistic missiles, as do the three other weapons unveiled by Pyongyang’s numerous tests so far — the KN-23, large caliber launch guided rocket launchers and its new tactical weapon resembling the U.S. MGM-140 Army Tactical Missile System.

Yet perhaps more controversial than the nature of the test was its timing, which came amid the global coronavirus pandemic.

The South’s JCS on Sunday urged the North to cease all such provocations, calling the test a “highly inappropriate” action in the current circumstances.

The U.S. State Department on Sunday also urged Pyongyang to cease provocations and return to negotiations toward the regime’s final denuclearization.

Such a comment from Washington mirrored its response to the North’s earlier tests this month on March 9 and 21, seemingly separate from U.S. President Donald Trump’s dispatch of a personal letter to the North soliciting Kim’s cooperation with efforts to fight the coronavirus pandemic.

Notably muted as the U.S. response appears to be, aerial surveillance of the North’s activities is ongoing.

According to Aircraft Spots, a Twitter handle that tracks military aircraft movements worldwide, a U.S. Navy EP-3E reconnaissance plane was spotted flying above the Korean Peninsula a day before the North fired its missiles.