Payment plan will give funds to 14 million households

Payment plan will give funds to 14 million households 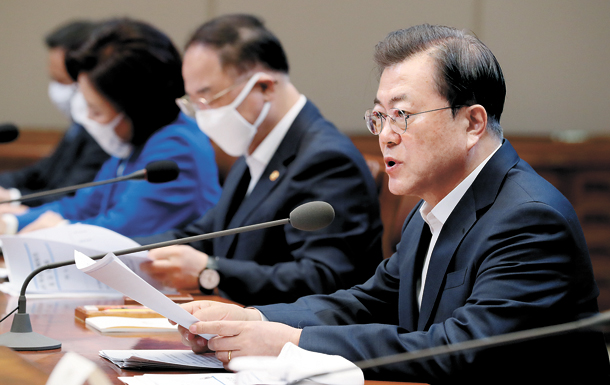 The government will give some kind of payments to 70 percent of the country’s households to counter the coronavirus outbreak, President Moon Jae-in said Monday. But they may be gift certificates or regional coupons to use in local markets.

At an emergency economic council meeting with top government officials, Moon unveiled the plan to help families and stimulate consumption. “In cooperation with local governments, we decided to pay emergency relief funds to people, including middle-class families,” Moon said. “1 million won [$816] to each household with four members will be paid.”

According to Moon’s plan, about 14 million families in lower-income brackets will be eligible.

In order to distribute the aid quickly, Moon said the government will submit a second supplementary budget bill to the legislature as soon as possible. On March 17, the National Assembly approved an 11.7 trillion won supplementary budget to counter the coronavirus outbreak.

“We plan to seek the National Assembly’s passage before the end of April, but after the [April 15] general elections,” Moon said, asking for bipartisan support for his plan. He said the government will also alter its spending plans to finance the aid program.

Moon said the decision was not easy, and many discussions and debates took place. “All people are suffering from the outbreak, and everyone participated in disinfection and quarantine measures,” Moon said. “All people deserve compensation for their suffering and efforts.”

The government cannot give assistance to all families, Moon said, because it needs to save money for further contingencies.

A presidential aide said Moon ordered the government to try to pay the relief before mid-May. “The National Assembly’s cooperation is crucial,” Moon was quoted as saying. 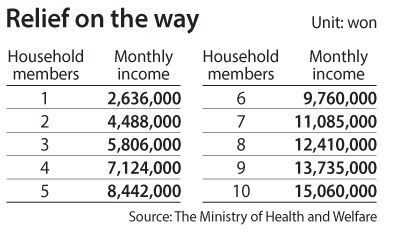 Later in the afternoon, Deputy Economic Prime Minister Hong Nam-ki announced further details of the government plan. According to Hong, a one-person household eligible for the emergency relief fund will receive 400,000 won in a one-time payment.

With the new project, the government will spend a total of 10.3 trillion won to help families impacted by the outbreak and boost consumption.

“The supplementary budget bill will be around 7.1 trillion won,” Hong said. “We will first create the funds by restructuring our annual expenditure budget plan. If that is not enough, it is unavoidable to issue deficit-financing bonds.”

The government will revise its annual expenditure budget plan by cutting projects that may not be implemented due to the outbreak.
Families will be able to receive both subsidies from the central government and local governments.

“The framework of paying up to 1 million won to eligible families will be maintained,” Hong said. “Local governments can pay more taking into account their own situations.”

Hong also left open a possibility of additional supplementary budgets. “We are urgently asking for the extra budget for the emergency relief fund, but if there are more people who need help, the government will offer additional support any time,” he said.

Opposition politicians condemned the Moon administration’s plan to pay cash-like subsidies to the majority of households on the eve of the April 15 general elections. “If the government gives out 1 million won, what will happen after that 1 million won is gone?” said Kim Chong-in, chief campaign manager of the main opposition United Future Party (UFP).

Other UFP officials said the administration is buying votes for the ruling party. “Many of us think the government is distributing cash for the election,” said a senior UFP official. “Honestly, who hates free money?”

Meanwhile, Gyeonggi Gov. Lee Jae-myung said Monday that the province will offer financial incentives to city and county governments in its jurisdiction that decide to operate additional relief fund programs for their residents.

Gyeonggi already announced a plan to give away 100,000 won to all residents in April in the form of the province’s “local currency,” which can mostly be used in traditional markets and small businesses.

The province has 13.26 million residents in 31 cities and counties. According to Lee, the provincial government will pay 10,000 won per person to cities and counties that decide to pay additional relief funds to the residents. Lee will use a special provincial budget to be spent at the governor’s discretion for balanced development.

If all city and county governments decide to operate relief fund projects, Gyeonggi will end up spending 132.6 billion won. As of Monday, 17 cities and counties have promised such projects.