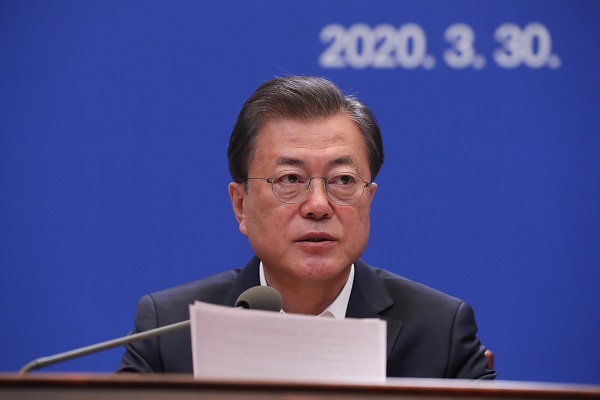 President Moon Jae-in announces Monday that the government will give cash payments to 70 percent of the country’s households, or about 14 million households, to counter the coronavirus outbreak. [YONHAP]

The government will give cash payments to 70 percent of the country’s households to counter the coronavirus outbreak, President Moon Jae-in said Monday.

At an emergency economic council meeting with top government officials, Moon unveiled the plan to help families and stimulate consumption. “In cooperation with local governments, we decided to pay emergency relief funds to people, including middle-class families,” Moon said. “1 million won [$820] to each household with four members will be paid.”

Eligible families will be in income brackets that account for 70 percent of the population. About 14 million families will receive the money.

In order to distribute the money quickly, Moon said the government will submit a second supplementary budget bill to the legislature as soon as possible. On March 17, the National Assembly approved an 11.7 trillion-won supplementary budget to counter the coronavirus outbreak.

“We plan to seek the National Assembly’s passage before the end of April, but after the [April 15] general election,” Moon said, asking bipartisan support for his plan. He said the government will also alter its spending plans to finance the cash payment program.

Moon said the decision was not easy, and many discussions and debates took place. “All people are suffering from the outbreak, and everyone participated in disinfection and quarantine measures,” Moon said. “All people deserve compensation for their sufferings and efforts.”

The government, however, cannot give cash to all families, Moon said, asking the excluded families to understand and make concessions for those with smaller incomes.