Debunking misinformation about the coronavirus

Debunking misinformation about the coronavirus

A churchgoer of the River of Grace Community Church in Seongnam, Gyeonggi, has her mouth sprayed with a saltwater solution by the pastor’s wife. [GYEONGGI PROVINCIAL OFFICE]

In Daniel Defoe’s “A Journal of the Plague Year” (1722), a pestilence that strikes the city of London in 1665 creates a desperate frenzy that throws people in the arms of counterfeit remedies and quack doctors.

The narrative, an account of a real outbreak of the bubonic plague that killed tens of thousands in England, testifies to dangerous panic that can engender behavior that does more harm than good.

There has been no shortage of fake news and rumors about the novel coronavirus in Korea, where experts and officials make daily public reminders warning people not to fall for sham remedies and practices peddled by those hoping to profit off the outbreak.

“Recently, an infodemic phenomenon has been threatening the lives and safety of our people,” said Jung Eun-kyeong, director of the Korea Centers for Disease Control and Prevention (KCDC). “Incorrect information that has not been verified medically can be even more dangerous than the virus, so it is important to check whether the source of that information is trustworthy.”

This article examines a variety of remedies and prevention methods proclaimed effective by widespread rumors in Korea, and the danger such false claims pose to public health.

“Granny cures”
One folk remedy involving garlic and its posited remedial effects on the immune system has been especially popular, circulating among the public around the world.

The garlic theory gained particular momentum in Korea after a sitting lawmaker publicly endorsed the treatment’s efficacy earlier this month.
At a conservative rally organized to criticize the Moon Jae-in administration, Rep. Ahn Sang-soo of the main opposition United Future Party told hundreds of participants that a regular dosage of water boiled with the vegetable helps build up immunity against the virus. 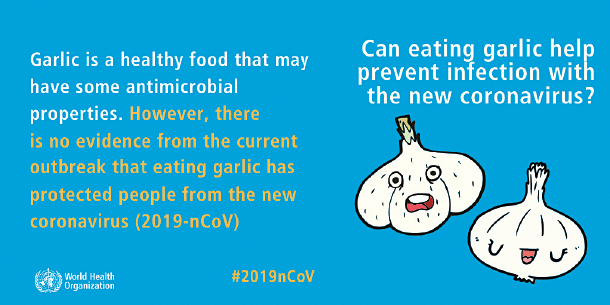 A notice from the World Health Organization warning people against relying on garlic to ward off the coronavirus. [WORLD HEALTH ORGANIZATION]

“This is a method I’ve used for around a decade myself based on the advice of a Korean medicine doctor who says it is useful to fight the common cold, and I’ve seen actual results.”

There is no truth to such a theory, experts say.

The WHO specifically addressed the consumption of garlic as a popular remedy, saying that while the vegetable is “a healthy food that may have some antimicrobial properties,” no evidence exists that can prove eating garlic has protected people from the coronavirus.
But garlic is not the only food promoted by unfounded rumors and folk remedies.

For one military base in Gangwon, the answer to the virus was found in raw onions. According to a spokesman for the Korean Army, the base’s division commander ordered subordinates to cut up raw onions and place three or four bulbs of the vegetable in every building at the base.

Several soldiers at the base attested onions were purchased based on the belief that it “eats away” the virus, the spokesperson said, adding that the commander appears to have put faith in a folk remedy that alleges the odor from onions is useful to prevent the common cold.

Other foods related to such remedies range from lemons, sweet potatoes, kale, spinach, mackerel, and all sorts of oils to dietary supplements infused with vitamins or minerals — all of which health experts reject as effective treatments for the virus.

“Do not be fooled by the litany of diverse solutions offered by non-professionals,” said the Korean Society for Preventive Medicine and Korean Society of Epidemiology in a joint statement last month.

“Eating garlic, applying anti-inflammatory ointments or baselessly rejecting food imports from China have no effects [in combating the coronavirus] and may cause even more serious side effects.”

Homemade disinfectants
In Namyangju, northern Gyeonggi, a woman in her 40s and her two children visited the emergency room of a local hospital earlier this month complaining of symptoms like vomiting, stomach pain and dizziness.

While the three eventually recovered thanks to an emergency response, the Korea Occupational Safety and Health Agency, or Kosha, on Sunday revealed exactly what caused the symptoms.

After hearing rumors that methanol, an industrial form of alcohol, could kill the virus, the woman sprayed the substance throughout her residence, on furniture and blankets. The home eventually became filled with methanol vapor, lightly poisoning her and her two children.
Officials later found there were no traces of the coronavirus at the home to begin with.

Methanol, also known as methyl alcohol, is a toxic substance to humans found in chemicals like windshield fluid and is frequently linked to cases of mass poisoning, particularly in developing countries.

In Iran, one of the worst-hit countries in the global outbreak, at least 200 people are believed to have died in recent weeks after consuming bootleg alcoholic substances that they believed could stave off the coronavirus. Many of the solutions they drank contained heavy doses of industrial alcohol like methanol or antifreeze sold by vendors seeking to profit off the panic induced by the outbreak.

Resorting to makeshift and unsubstantiated methods to ward off the virus can engender even more dangerous consequences, experts warn.

The clearest example of this is exhibited in the cluster infections linked to the River of Grace Community Church in Seongnam, Gyeonggi, earlier this month. In order to protect churchgoers from infection at a Sunday service on March 8, the pastor’s wife sprayed the mouths of each with a saltwater solution.

While not completely proven, it is believed an infected patient came into contact with the spraying device, which subsequently produced more than 60 coronavirus patients.

The saltwater prophylactic ritual, according to analysts, may have been prompted by a popular and false rumor circulating among church groups in Korea that saltwater can bolster one’s immunity against the virus.

Detecting/ warding off the virus
In late February, when Korea’s virus cases spiked from dozens to thousands, Yonsei University’s Severance Hospital in western Seoul issued a public notice debunking the contents of a popular Facebook post claiming to contain advice from a former head of the hospital.

“Taiwanese health experts have offered a simple test you can perform on yourself every day: hold your breath for 10 seconds,” the post claimed.

“If you are able to complete the task without coughing, feeling uncomfortable or cramped, it means your lungs have not been affected by fibrosis and therefore have not been infected.”

The post further claimed that Japanese doctors recommended people drink a sip of water every 15 seconds, so that the water can carry the virus into the stomach where it can be killed by stomach acids.

“Such content is unrelated to the Severance Hospital,” read the hospital’s notice warning. “Rather than believing such fake news and rumors, we ask people to wear face masks and take care of their health.”

The Korean Medical Association (KMA), one of the largest associations of health professionals in the country, also warned against fake news falsely attributed to its members.

One popular post making rounds on social media claiming to be a list of KMA recommendations said people should drink hot water frequently in order to kill the virus and that a runny nose indicated a person was not infected with the coronavirus.

“Fake recommendations that say people should visit the doctor when their nose is clogged or feel dehydrated could cause misunderstandings among individuals and encourage them to think they’re healthy if there are no symptoms.”

The KMA’s actual public recommendations about the virus can be found at www.coronafact.org, in the Korean language. The WHO operates its own Covid-19 fact-checking page called “Myth busters” that can be accessed on the organization’s website.

Then what facts do we have?
According to the KCDC, the most common symptoms associated with the coronavirus is a fever, fatigue and a dry cough, though some patients develop muscle pain, a clogged or runny nose, a sore throat or diarrhea.

“Most people — around 80 percent — recover without special treatment, though around one out of six patients experience breathing difficulties throughout the illness,” read a KCDC notice on the virus. Older people, or those that have high blood pressure, heart problems or other underlying diseases like diabetes are at the highest risk of developing serious illnesses from Covid-19, it said.

As the virus affects different people in different ways, WHO and medical experts worldwide recommend all people, even those without symptoms, practice social distancing by refraining from physical contact and avoiding crowds.

The single best advice repeatedly stressed by professionals is that people should wash their hands frequently with alcohol-based hand sanitizer or soap and water.

“By doing this you eliminate viruses that may be on your hands and avoid infection that could occur by then touching your eyes, mouth, and nose,” the WHO’s website read.

As to when the disease will be stymied and a vaccine developed, experts remain unsure. Countries around the world, however, are concentrating efforts on research.

A vaccine used to treat tuberculosis, known as BCG, has reportedly gained the attention of researchers in Europe for its potential to bolster a person’s immune response to the coronavirus. According to the magazine Science, clinical trials on the drug’s effects on the coronavirus will begin in the Netherlands this week.

Experts are also looking into the efficacy of existing drugs on the new virus, with WHO launching tests on treatments used against the Ebola virus, malaria and AIDS.

But even if a vaccine is developed, experts warn it may take up to a year for the drug to be mass-produced and commercialized. “In a global pandemic situation, the coronavirus can only end if enough people contract the disease [and gain immunity] or an effective vaccine emerges,” said Oh Myeong-don, chair of the National Medical Center’s new infectious disease central clinical committee in Korea.