At least 28 people infected with the new coronavirus were traced to a Protestant church in Guro District, western Seoul, local officials announced Monday, sparking concerns of another major cluster in the capital.

Seoul officials said that churchgoers of the Manmin Central Church as well as numerous people they were in contact with, such as relatives and acquaintances, tested positive for the coronavirus since the first infection connected to the church was detected last Wednesday.

Officials said the church mainly offered online streaming of services since March 6, but an infected person may have spread the disease when several workers and adherents of the church convened this month to discuss filming of the services.

The Seoul Metropolitan Government said Monday it shut down and disinfected the church and assigned 40 officials to track down who the infected people had contact with to block a possible spread. 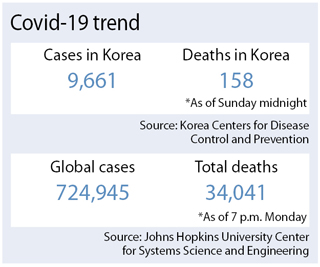 The largest cluster Seoul has experienced to date was at an insurance call center in Guro District, to where at least 158 cases have been traced.

Officials have yet to find any links between the two clusters.

Nationwide, the Korea Centers for Disease Control and Prevention (KCDC) said 78 new cases of the coronavirus were counted Sunday, down from 105 cases tallied Saturday.

By Sunday midnight, 158 people have died, up by six from the previous day, while 5,228 have been declared fully recovered, up by 195 from the day before.

Daegu’s most recent cluster at a psychiatry hospital grew bigger Monday when officials announced that 58 more people were diagnosed, bringing total cases linked to the Second Miju Hospital to 133. The hospital has 72 workers and 286 patients, and health officials said epidemiological investigations were ongoing.

Health officials believe the Second Miju Hospital infections are connected to an earlier outbreak that occurred at Daesil Nursing Hospital, which is in the same building, because they share an elevator.

At least 90 coronavirus patients have been traced to Daesil Nursing Hospital. The first case at Daesil was discovered on March 20, six days before the first case from the Second Miju Hospital.

On the 30-something-year-old British man in Suwon, Gyeonggi, who disobeyed the government’s self-isolation order and roamed around his neighborhood last week before receiving his positive test results, Vice Health Minister Kim Gang-lip said Monday that the Ministry of Justice has opened an investigation and is weighing legal options against him — including deportation.

“The British man is currently hospitalized so we can’t summon him yet” for questioning, Kim said in a press briefing. “When it becomes okay to summon him, [government officials] will hear directly from him why he violated the rules and then decide whether to expel him from [Korea].”

The British man arrived in Korea on March 20 from Thailand, where he said he went for a business trip. He visited a local health center in Suwon three days later to be tested and was told to self-isolate at his home till his results came out.

He disobeyed that order, local health officials said, by roaming around Suwon and a neighboring city and going to a screen golf arcade, all without a face mask on.

He’s currently hospitalized in the province. The Korean government had warned foreigners last Thursday they could be deported if they breach self-isolation orders.

The instructor tested positive on the same day as another instructor in Dobong District, northern Seoul, fanning fears that students might get infected.

Seoul’s city office announced Monday that services for lines No. 1 through 9, plus the Ui-Sinseol line, will be reduced by an hour to end at midnight starting Wednesday.